QUICK POPS
What Is Totalitarianism?
What Is Dictatorship Or Authoritarianism?
Ukraine War: Torture Cells And Mass Graves Discovered
SCO Summit: Exchange Of Smiles Only Between Xi,...
Shanghai Cooperation Organization Summit 2022
Biden Commemorates 9/11 at the Pentagon
Queen Elizabeth II Has Died
What Are Party Systems?
Inflation In Pakistan At 47-Year High
Why Are Indian Farmers Committing Suicide?
Political Science

What is Political Science?4 min read 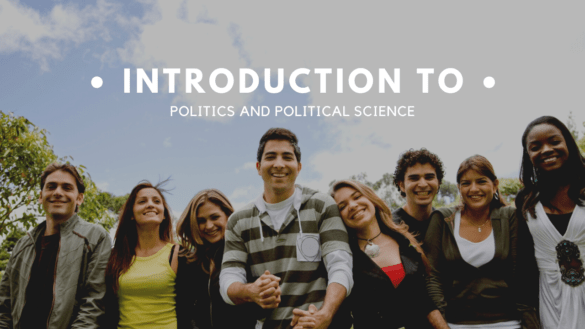 As we know, “Science” is the academic and systematic study of the behavior and structure of the natural and physical world through observation, evidence, and experiment.

Political Science is that branch of knowledge that deals with Systematic and Scientific study of the Structure and Behavior of the State & Government, Political System & Institutions, Rights & Duties, Relationship Between Rulers & The Ruled and profound study of all those Human Activities & Institutions that are related to an organized life in a State.

Politics indicates the subject matter of our study, and Science designates the methodology or the way of studying the process of Politics.

The first word seeks to answer “What is to be Studied?” and the second one refers to “How Is It Studied?”

Therefore, the Political Occurrence which should be studied following a specific plan or system is called Political Science.

Let us examine some of those definitions:

It is evident from the above definitions that the central theme of Political Science is the “State.” It is the study of the state, its origin, nature, functions, structure, and so on.

The element of “Power” in the study of the subject has also been emphasized by modern political scientists.

Abraham Kaplan and Harold D Lasswell have defined politics as the “study of shaping and sharing of power,” which suggests that struggle for power is the subject matter of the study of politics.

Since this struggle takes place at all levels, Domestic, Regional, National, and International Politics become a universal activity.

Robert A Dahl uses the term “Political System” instead of “Politics,” and he defined it as “Any persistent pattern of human relationships that involves, to a significant extent, control, influence, power or authority.”

So, the study of Politics or Political Science includes state and government and an exploration of the struggles for power that take place at all levels beginning from the domestic household to the world at large.

Hence an inclusive and in-depth view of the subject of Political Science includes everything connected with man’s life in the process of making himself.

Political Science is a normative and progressive social science studying political aspects of social life. Its nature may be summarized as given:

Aristotle says that man is a social animal.

Human beings are different from other animals. Because human beings are civilized and their nature demands progress from good to better and from better to the best.

They have various basic needs like food, shelter, clothing, and defense. To ensure these needs, human beings depend upon one another.

They provide help to each other and even quarrel. In their daily affairs, various conflicts and differences poison the social setup.

To achieve an orderly society, societies need various powerful institutions, laws, and persons of authority. A balanced relationship is produced through these persons and institutions, and a Politically Organized Society or a Political System is established.

Now a subject or discipline is required to study such a Politically Organized Society; It is Political Science to study these institutions and factors, which are to achieve and maintain a politically stable society. It is to study politics and political aspects of life.

The word “Politics” has been derived from the Greek word “Polis,” which means “City State.” In the 5″ — 4″ century B.C., the city-states emerged in ancient Greece, and to study the political aspect of the city-states, political Science emerged.

Political Science grew and was enriched by the everlasting political thoughts of the Greek philosophers, Plato and Aristotle.

With the progress of human civilization, culture, and scientific development, human interrelations marched towards refinement, their relations complicated, and the aspects of life widened.

So, separate subjects were needed to study every aspect of life separately. The business relationship was studied by Economics, human past by History, social relationship by Sociology and similarly, political aspects of life by Political Science.

Unfortunately, these two terms are often inter-mixed, which is wrong.

Both the terms “Politics” and “Political Science” were used in the same meanings by the early political theorists, but a clear difference has been made in modern times.

Politics can be defined as “The struggle or confrontation between or among the political parties or persons with a view to control the government and then impose decisions and charters by means of governmental authority.”

While Political Science deals with the study of the state and government.

So, Political Science is merely the study of state and government while politics is practice. One is practical, while the other is theoretical.

Politics is the game of the active politicians, while the political scientists and its students deal with political Science.

Politics is the struggle for power, while political Science is the Science to study state and government.

Current politics is the raw material for political Science.

But, despite these differences, “Politics” and “Political Science” cannot be detached from each other. Both are required for each other’s existence.

New Trends To Widen Its Scope:

With the passage of time, the subject matter of Political Science has expanded, and it is mainly because of the spread of democratic ideals.

It has expanded and is going to expand that some of its sub-disciplines as International Relations, Public Administration and Policy Studies have become full-fledged disciplines.

Political Science is a progressive and dynamic science developing with the changing conditions and human evolution.

It is a normative science that exposes negative and positive aspects to its students and researchers, concluding the final result.

In simple words, Political Science is that part of Social Sciences that studies political aspects of human society and paves the way for harmonious relationships between the rulers and the ruled.

In Britain; Royal, Military Honors, and HRH Titles Were Stripped From Prince Andrew