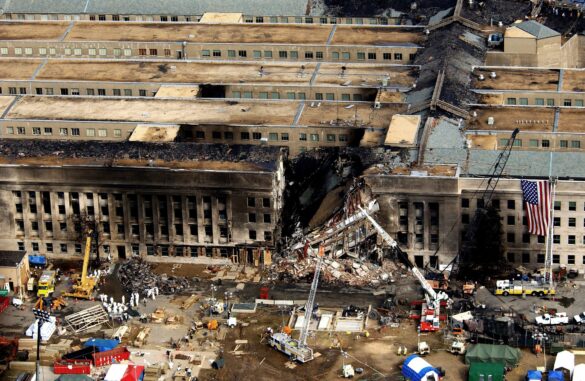 US President Joe Biden is scheduled to lay a wreath at the Pentagon on the anniversary of the 9/11 attacks and make a speech.

In the United States, Sunday, September 11, commemorates the terrorist attacks that the hijackers carried out in 2001 at the World Trade Center in New York, the Department of Defense (Pentagon) building, and crashed the third passenger plane in the state of Pennsylvania.

Almost 3000 people were killed in these attacks carried out by the Al-Qaeda network.

After the attacks, the US and its allies invaded Afghanistan and overthrew the Taliban government.

Along with President Joe Biden, his wife Jill Biden will speak at the site of the crash of Flight 93 in Shanksville, Pennsylvania, where the National Memorial has been built.

Also, Vice President Kamala Harris and her husband will go to New York City and speak at a ceremony on September 11, National Day.

In the United States, there are usually heavy police presence at train stations, airports, and other important places before 9/11.

But this year, the world is celebrating September 11 while the Taliban have once again ruled Afghanistan and have just announced their interim cabinet.

The 21st anniversary of these terrorist attacks is being celebrated in the United States when Ayman al-Zawahiri, the leader of the al-Qaeda network, was killed in a US drone strike in Kabul last month.

President Biden said about the killing of Zawahiri on August 1: “On Saturday, the United States military conducted a successful airstrike on my order in Kabul, Afghanistan, in which the leader of al-Qaeda Ayman al-Zawahiri was killed.”

He added: “He (Al-Zawahiri) planned attacks against the United States for several decades, such as the bomb attack on the US Navy ship that killed 17 marines and injured dozens of others. He played an important role in the bomb attacks on the US embassies in Kenya and Tanzania, which killed 224 people and wounded another 4,500.

The killing of the leader of al-Qaeda in the US airstrike in Kabul shows that the US can eliminate threats against US interests without a military presence in that country.

Even after more than two decades have passed since the arrest of the man believed to be the mastermind of the 9/11 terrorist attacks in the United States, his case is mired in legal complications.

As today marks the 21st anniversary of the terrorist attack, Khaled Sheikh Mohammed and four others accused of 9/11-related crimes are being held at a camp in Guantanamo Bay.

His case in the military tribunal has been postponed continuously. The latest setback to the lawsuit came last month when pretrial hearings, scheduled for early fall, were canceled.

This delay is a cause of disappointment for the loved ones and relatives of the nearly 3,000 people killed in the attack.

According to the Associated Press news agency, before sunrise on March 1, 2003, the United States captured Khalid Sheikh Muhammad, who was hiding in the city of Rawalpindi, Pakistan, and achieved a major victory against the planners of the terrorist attacks of September 11, 2001.

If convicted at trial, Khalid Sheikh could face the death penalty.

However, in the meantime, while Khalid Shah’s case has not yet reached the trial stage, the United States killed Osama bin Laden, the leader of al-Qaeda, in an attack in the year 2011, and then Ayman, who became his deputy and then the leader of al-Qaeda. Al-Zawahiri was also killed in a drone attack this year.

In a written statement during a hearing at the tribunal, Khalid Sheikh admitted to swearing allegiance to Osama bin Laden and acting as Osama bin Laden’s operational director to organize the 9/11 attacks.

According to the statement, Khalid Sheikh is also responsible for the bombings of the World Trade Center in 1993, the attempted assassination of President Bill Clinton in 1994, and Pope John Paul II in 1995.

His case in the military tribunal has been postponed continuously. The latest setback to the lawsuit came last month when pretrial hearings, scheduled for early fall, were canceled. This delay is a cause of disappointment for the loved ones and relatives of the nearly 3,000 people killed in the attack.