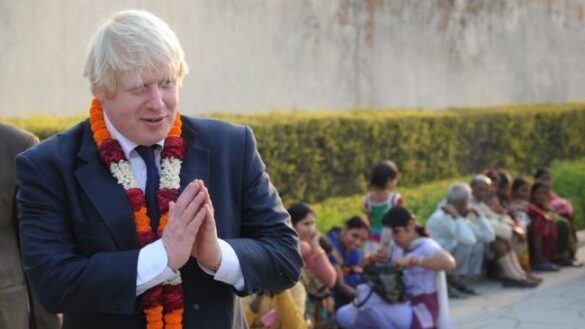 The Prime Minister will announce many trade, investment, and technology partnership agreements between the UK and India.

He also praised Mahatma Gandhi after visiting his ashram.

British Prime Minister Boris Johnson arrived in Gujarat on Thursday morning. He is on a two-day visit to India and first visited the state capital Ahmedabad.

He will reportedly announce a number of trade deals during his visit. Which will be aimed at ushering in a new era of trade, investment, and technology partnership between the UK and India.

According to a press release issued by the British High Commission in New Delhi, Prime Minister Johnson will use his visit to India to further enhance the long-standing relations between the two countries.

He seeks to reduce business barriers for British businesses to create and develop jobs in the country.

“Today, UK and Indian businesses will approve more than 1 billion US$ in new investment and export deals. In areas ranging from software and engineering to healthcare.

The British Prime Minister said: “As I arrive in India today, I see the vast potential that our two great nations can achieve together.

From 5G and Telecom to Health Research and Renewal, The UK and India lead the world in new energy partnerships. “

“Our strong partnership provides jobs, development, and opportunities for our people. This will continue to grow in the years to come,” he added.

According to reports, Boris Johnson will first meet prominent Gujarat businessmen in Ahmedabad on Thursday.

Gautam Adani of the Adani Group is topping the list.

The headquarter of  Adani Group is in Ahmedabad.

Many domestic and international issues are expected to be discussed on the occasion.

Western countries are concerned about India’s stance, especially in the wake of the Russian invasion of Ukraine.

On Thursday morning, Boris Johnson landed in Ahmedabad, Gujarat, instead of the capital Delhi, where he received a warm welcome.

After arriving at the hotel, he visited Mahatma Gandhi’s Ashram in Sabarmati and tried to spin the wheel there.

On this occasion, the British Prime Minister praised Gandhiji. He Said, “Coming to the ashram of this extraordinary man, and understanding how this man used such simple principles of truth and non-violence to make the world a better place is a great honor indeed. “