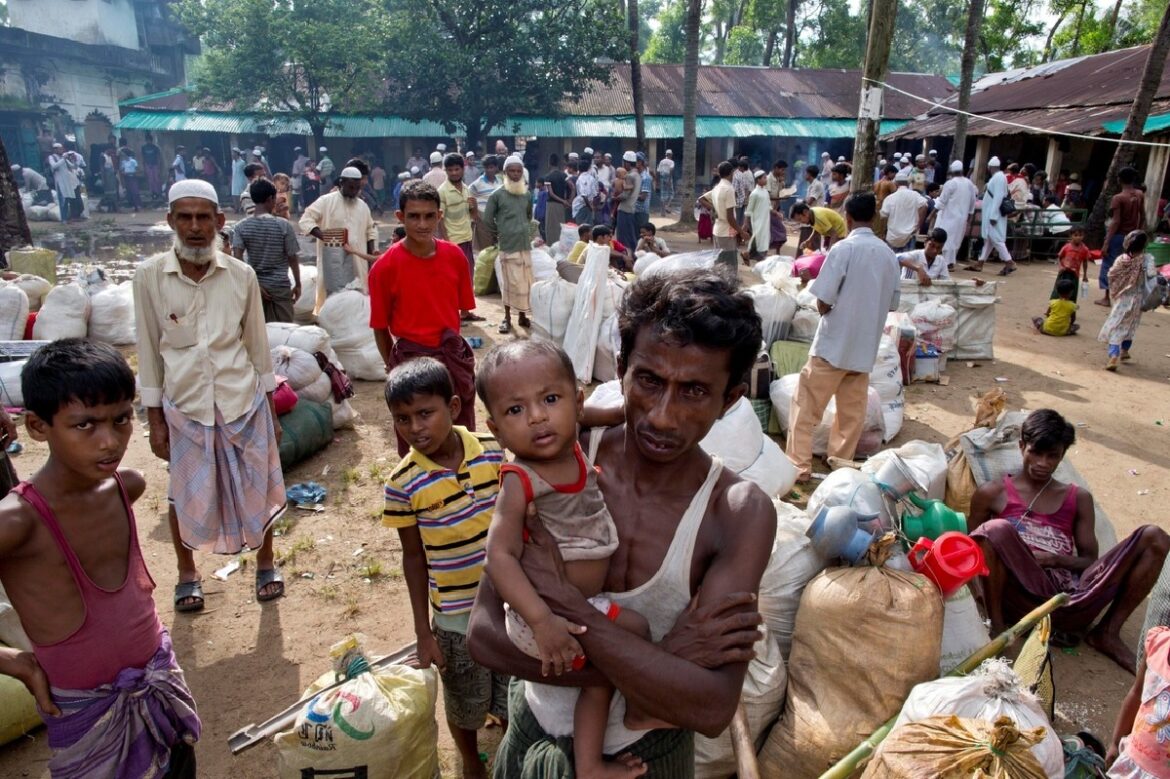 On Thursday, thousands of Rohingya Muslims marked ‘Genocide Remembrance Day’ in Bangladesh by holding rallies and condemning the humanitarian incident.

Rohingyas, who were forced to flee the country and migrate after the military operation in Myanmar, held rallies to mark five years since the ‘genocide’ happened in Bangladesh.

In August 2017, about 750,000 Rohingya Muslims began crossing the border from the predominantly Buddhist country of Myanmar to escape attacks.

A majority of them sought refuge in neighboring Bangladesh during the ‘massacre’ of Rohingyas.

These events have been registered as a historical case of genocide in the highest court of the United Nations.

Today, about a million Rohingya, half under 18, live precarious lives in camps or shantytowns. Here sewage boils during monsoon rains and filth flows like rivers.

On Thursday, August 25, thousands of Rohingya Muslims living in refugee camps in Bangladesh took out rallies.

Expressing their protest, Rohingya Muslims held up banners in their hands, demanding their return to their native state.

Mong Sawidullah, a young leader of Rohingya Muslims, looked overwhelmed on the occasion.

“Today is the day when thousands of Rohingyas were killed,” he said.

He further said, “Only the Rohingyas can understand the pain associated with August 25. Five years ago today, nearly one million Rohingya were displaced. More than 300 of our villages were burnt to ashes on this day in 2017.

Syedullah, another leader, said, “We just want to return to our homeland in a dignified and dignified manner. The international community is doing nothing. Here we are lying in camps in tarpaulin and bamboo shelters and barely surviving on handouts.”

Many of the Rohingya Muslims at the rallies also called for repealing a 1982 law. This law stripped them of their citizenship in Myanmar and has since made them widely seen as foreigners.

These residents have also refused to return home without protection and guarantees of their rights.

The leaders complain that their community is kept in camps surrounded by barbed wire, where the security situation is deteriorating.

Since 2017, at least 100 people have been killed in several incidents of violence in the area.

Many deaths are blamed on the Rohingya insurgent group, drug trafficking, and human-trafficking groups. These groups continue to recruit youth readily in the camps.

“This is a prison for the Rohingya,” said one young Rohingya activist, who declined to be named for fear of retaliation by Bangladeshi police. In these five years, the life of the Rohingya has become worse.”

“Rohingya shops were demolished,” he added. We had to get permission to go outside the camps to visit our relatives. “We are feeling insecure because of increasing incidents of violence and targeted killings.”

A survey of refugees published by Doctors Without Borders (MSF) shows that conditions in Rohingya camps are becoming increasingly unsanitary.

What can the European Union do for the return of the Rohingya Muslims?

According to the European Union, the current situation in Myanmar “is not conducive to the return of refugees in the near future.”

According to an estimate, neighboring Bangladesh sheltered an estimated 1.1 million Rohingya Muslims after a violent crackdown by the Myanmar army in 2017.

Many consider Myanmar’s military’s treatment of the Rohingya as genocide against the Muslim-majority group.

Bangladesh has sounded the alarm over the cost of the refugee burden and warned of a potential regional crisis.

At the international level, the pressure for the return of refugees is also increasing. The UN Human Rights Council passed a resolution in June, calling for the swift repatriation of the Rohingya.

A Slight Hope Of Return

At present, the future of Rohingyas wishing to return to Myanmar is bleak. International law states that refugees should not be sent back without guarantees of protection and humane treatment.

According to the European Union, it cannot be guaranteed.

EU spokeswoman Nabila Masarli said that the bloc “supports the voluntary, orderly, safe and dignified return of Rohingya refugees to Myanmar, if and when conditions allow.”

The spokesman added that the current situation in Myanmar “is not conducive to the return of refugees in the near future.”

Since the overthrow of the democratically elected National League for Democracy (NLD) government by the Myanmar military in February 2021, the country has been in turmoil.

According to a non-governmental organization based in Thailand for the support of political prisoners, during the ongoing civil war in Myanmar, according to conservative estimates, more than 2,000 civilians have been killed, and millions have been displaced.

The army has control over limited areas of Myanmar. The remaining areas are under the control of defense forces loyal to the Government of National Unity (NUG).

The defense force consists of a shadow government formed by deposed politicians, political activists, and several ethnic armed groups that have been at odds with national authorities for decades.

Intensification Of Ongoing Fighting In Rakhine

Violence is on the rise in Myanmar’s southwestern state of Rakhine. This is the same state that many Rohingya refugees fled from and will likely return to – where clashes continue between the Arakan Army, an ethnic rebel group, and the Myanmar military.

Radio Free Asia reported that at least ten clashes since July 18. This situation does not bode well for the ceasefire agreement, which the two sides agreed to in 2020.

According to experts, the Arakan Army has worked hard to increase its political autonomy over the past two years. Which is entirely unacceptable to Myanmar’s military government.

According to them, “Whether it’s sheer arrogance or a legitimate concern that the Arakan Army might try to secede, the military is starting a war it can’t afford and has wider strategic consequences in Myanmar.”

Support from Arakan Army will be required for the return of Rohingyas. Analysts say the ethnic militia group’s political wing, known as the United League of Arakan, has administrative control over much of the Rakhine state.

The group has recently eased its decades-long hostility against the Rohingya Muslims minority. Arakan Army chief Tun Myat Ning has expressed his willingness to return the Rohingya to Rakhine society.

“The militias have their reasons for changing course,” says Christina Keronska, an expert on Myanmar affairs. Who in May held talks with the NUG’s civilian shadow government for the first time since the coup by senior Arakan Army leaders.

This led to speculation about a possible alliance against the ruling military junta in Myanmar.

The NUG says that if it succeeds in ousting the military junta, it will introduce a devolution of power and possibly a federal system.

This could play well for the Arakan Army, which has been demanding autonomy for Rakhine State for a decade.

Analysts believe the militia group is seeking international legitimacy and that aid to the Rohingya crisis will bring it support from abroad.

Christina added that the big question is whether the European Union and other foreign parties will be willing to involve the Arakan Army in repatriating the Rohingya.

According to the EU spokesperson, Brussels has not yet had any contact with the Arakan Army in Myanmar on the Rohingya repatriation process. It has no plans to establish relations for this purpose.

However, a senior EU source denied this statement by an EU spokesperson. The source said, that the European Union has had some discussions with the Arakan Army, including on the Rohingya issue.

The NUG And The Rohingya Muslims Genocide

The NUG is mainly composed of ousted politicians from Myanmar’s former ruling party, which has a tainted history of relations with the Rohingya minority.

The Rohingya genocide happened when the NLD was in government. Ousted civilian leader Aung San Suu Kyi, sentenced to 18 years in prison on corruption charges, was widely criticized by the international community for failing to condemn the military-led genocide.

But the NUG has since expressed willingness to accept the Rohingya and repeal the Citizenship Act of 1982. They used this act to deprive the Rohingya of Myanmar citizenship.

With repatriation efforts unlikely in the near future, the EU is focusing on aid to help refugees. In May, Brussels donated an additional $22 million in aid that will go primarily to the Rohingya in Bangladesh.