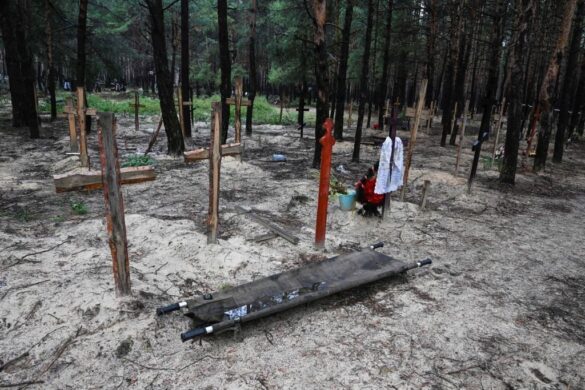 Ukrainian officials say they have discovered at least 10 ‘punishment camps’ in the eastern region of Ukraine liberated from Russia.

These prisons were discovered when a mass grave containing 450 bodies was also found near the Izyum area.

The Ukrainian forces retaliated by forcing the Russian troops to leave and re-establish their control over the area.

A mass grave has just been found near Izyum. The brutality, torture, harassment, and mass killings in the occupied area lasted for many months.

Meanwhile, the United Nations said it wants to send a team to investigate the mass grave discovered to determine the cause of the deaths.

Ukrainian President Volodymyr Zelensky, who visited the retrenched areas on Wednesday, said the Russians were to blame.

President Zelensky said in a video address late Thursday that Russia must be held accountable for its actions.

“Russia is leaving behind deaths everywhere and must be held accountable.”

A local police officer has said that the bodies found in the mass grave indicate that they were either shot dead or killed in bombings.

Modi: No Time For War. Putin: Would Like To End Ukraine War Soon

During a meeting with PM Modi, Putin said he wants to end the conflict in Ukraine as soon as possible. He said he understands that India is concerned about this war.

However, later the Russian president told reporters that the “liberation” of the entire Donbas region in eastern Ukraine is Russia’s main military goal.

And this purpose does not require revision. “We are in no rush.” Vladimir Putin said.

He added that Russia had deployed only volunteer soldiers for the war in Ukraine.

However, the news agency AFP has quoted a different statement from the President of Russia. AFP reports that President Putin told Prime Minister Narendra Modi: “I know your position on the Ukraine conflict, your concerns… We will do our best to end it as soon as possible.”

The Russian president accused Ukraine’s leadership of rejecting the negotiation process and seeking to achieve its goals on the battlefield through military means.

According to sources, in the meeting, Indian Prime Minister Modi told Putin that now was not the time for war.

New Delhi and Moscow have old ties dating back to the Cold War era. Russia is by far the largest arms supplier to India.

But in the first one-on-one meeting between the two leaders since Russia’s invasion of Ukraine in February this year, Modi told Putin, “I know today is not the time for war.”

Modi stressed the importance of “democracy, diplomacy, and dialogue” in the meeting and said they should move forward on the path of peace.

It may be recalled that this statement by the Indian leader came a day after Putin admitted that China, a key ally of Russia, has reservations over the Ukraine conflict.

The US Defense Department’s (Pentagon) intelligence chief has claimed that Russian President Vladimir Putin has failed to achieve the initial goals he had hoped for in launching the offensive in Ukraine due to his military deployment and fierce resistance in Ukraine.

Defense Intelligence Director Lt. Gen. Scott Barrier told the Intelligence Community’s National Security Conference in Maryland that the Ukraine war has reached a point where Putin will have to rethink his goals.

He said it was now clear that the objectives for which Putin invaded Ukraine in February were no longer achievable.

Scott Barrier added that Putin sent troops into Ukraine to overthrow what he said was a pro-Western government. But Ukrainian forces resisted and pushed back Russian forces in the early days of the war.

He said Russia suffered a major blow last week when Ukrainian forces retook control of several Russian-occupied Ukrainian territories in the northeast in a counter-attack.

US President Joe Biden and other officials have yet to call Russia’s recent retreat a victory for Ukraine. However, analysts say it is difficult to determine what will happen next.

Barrier said of Putin that he has now reached a stage where he has to decide. “We don’t know what that decision will be, but only after that will it be possible to estimate how long the war will last.”

Can Putin Use Weapons Of Mass Destruction?

In response to the question of whether Putin will not use weapons of mass destruction after the success of Ukraine with the support of the United States and Western countries? David Cohen, the deputy director of the American intelligence agency CIA, said that we need to Don’t think Putin will back down from his agenda in Ukraine. Because we have yet to see any reason to believe that Putin is backing away from his ambitions.

“They have found no evidence to suggest that Russia is considering using weapons of mass destruction,” he said.

Cohen added that the US should not assume that Putin’s appetite for risk-taking has died, as Putin has warned the US and its allies not to get involved in the Ukraine conflict.

During the Shanghai Cooperation Council (SCO) meeting in Uzbekistan, Putin vowed to continue operations against Ukraine, warning that if the Ukrainian military hit targets inside Russia, it would also damage infrastructure in Ukraine.

SCO Summit: Exchange Of Smiles Only Between Xi, Modi, And Sharif