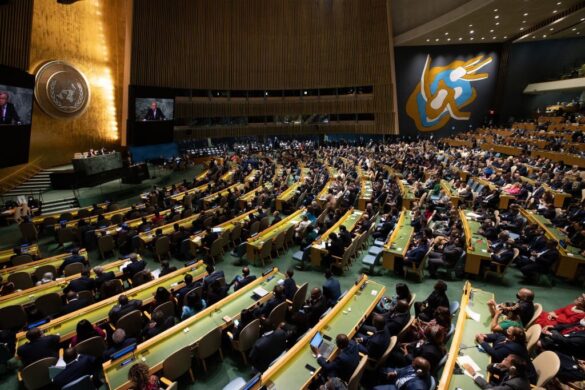 At a time when the world is suffering from rising energy and food prices, the Russian invasion of Ukraine and climate change are high on the agenda of the 77th session of the United Nations General Assembly.

Issues such as the Russian invasion of Ukraine and climate change dominated the first day of the 77th session of the United Nations General Assembly in New York City.

The week-long General Assembly session began on Tuesday, September 20, with leaders from around the world voicing their concerns about global challenges such as the worrisome international system, hunger, and climate change.

The rising food and energy prices due to the effects of the war in Ukraine exacerbated these problems.

Condemnation Of The Russian Attack

Instead of coming to New York for the meeting, Ukrainian President Volodymyr Zelensky spoke online.

He blamed Moscow for deliberately creating the food crisis. “Any state that incites famine, that seeks to privilege access to food, that seeks to leave the protection of nations through famine to the mercy of a dictator,” he said. The world should react strongly to such a state.

He said that under normal circumstances, Ukraine produces large amounts of agricultural produce. However, Russia is responsible for disrupting the country’s exports by blocking Ukrainian ports and taking other “immoral measures.” “Russia should take responsibility for this,” he said.

In his address, Japanese Prime Minister Fumio Kishida expressed disappointment at the organization’s failure to respond to the Russian attack on Ukraine. He said that the UN Security Council needs reformation since Russia has veto power as a permanent member.

In his speech, Kishida said that the United Nations had failed to fulfill its full responsibilities in maintaining world peace. Therefore, “the foundation of the international system is currently shaking badly.”

In his address, French President Emmanuel Macron appealed to all countries not to remain neutral in condemning the Russian attack on Ukraine.

He said that this war was a new type of imperialism. Macron stressed that negotiations to end the war could only succeed if “Ukraine’s sovereignty is respected, its territory is liberated, and its security is protected.”

German Chancellor Olaf Schulz also strongly criticized the Russian attack on Ukraine during his speech at the United Nations General Assembly on Tuesday.

He said that it is plain and simple an imperialist act. Like Macron, the German chancellor highlighted Russia’s nuclear weapons and war crimes in Ukraine and urged other leaders not to be complacent on the issue.

Referring to climate change, Marcos said, “Now is the time to talk about ‘ifs and whens.'” He called on industrialized nations to reduce greenhouse gas emissions and develop Fulfill your obligations to help countries.

He added, “The impacts of climate change are uneven and reflect a historical injustice, with those least responsible suffering the most.”

This injustice must be rectified, and those who need to do more need to act immediately.” “The world’s richest people have put the world’s poorest at risk,” he added.

“The world has failed to break our addiction to fossil fuels,” warned Marshall Islands President David Kabwa, stressing that not enough has been invested in climate adaptation.

“Today, we renew our appeal to the world to declare total war against the greatest challenge of this century, the monster of climate change,” he said.

At the United Nations General Assembly, the Turkish President said that he is praying for establishing justice-based permanent peace and prosperity in Kashmir.

Earlier, India has been criticizing his statements regarding Kashmir. Addressing the world leaders in the 77th session of the United Nations General Assembly, Turkish President Recep Tayyip Erdogan emphasized the solution to the Kashmir conflict while mentioning the global problems.

He said that due to this problem, ‘peace has not been established between India and Pakistan yet.’

What Did The Turkish President Say?

While addressing the United Nations General Assembly, Recep Tayyip Erdoğan talked about many global issues and mentioned the anxiety in the region regarding Kashmir.

This is very unfortunate. We also hope and pray that there will be permanent peace and prosperity based on justice in Kashmir.”

This latest statement of the Turkish President came just a few days after he met with Indian Prime Minister Narendra Modi.

Last Friday, the two leaders met on the sidelines of the Shanghai Cooperation Organization summit in Samarkand, Uzbekistan, and reviewed various aspects of bilateral relations.

On this occasion, the two countries also discussed ways to deepen cooperation in various fields.

The Turkish President has been raising the issue of Kashmir from time to time, and before that, he had openly discussed the tense situation in Kashmir in the General Assembly.

He has been openly supporting the rights of Kashmiris on this issue. In his historic address to the Pakistani Parliament in 2020, President Erdogan compared the struggle of the Kashmiri people to the struggle of the Turkish people against foreign domination during the First World War.

However, India has been criticizing the Turkish President’s comments on Kashmir and says it interferes with India’s internal affairs.

The Indian Ministry of Foreign Affairs reacted to his address to the Pakistani Parliament and said that India rejects all his statements regarding Kashmir.

India and Pakistan have been at loggerheads over Kashmir since independence from British rule. India claims this disputed region as its inalienable and inalienable part.

But Kashmir’s separatist leaders and Pakistan have been demanding a referendum.

Since India terminated the special powers granted to the disputed region of Kashmir, the Kashmir issue has started to be openly raised, and the Organization of Islamic Cooperation (OIC) has also been discussing it.

Political leaders in India also keep talking about this disputed region. Yesterday, Member of Parliament Asaduddin Owaisi asked the government that cinema halls are opening in the Kashmir valley, but when will the lock on the historic Jama Masjid of the city open?

It should be noted that the central administration of Kashmir has started a new campaign to build cinema halls under which cinema halls will be built in every district.

Recently, the governor has also inaugurated two such cinemas. In 2019, the Indian government revoked the special powers granted to Kashmir and also revoked its statehood.

Since then, the central government has ruled here, and many Kashmiri leaders, social activists, and a large number of scholars are still in jail.