After 75 Years, Indian Democracy Is Under Pressure2 min read 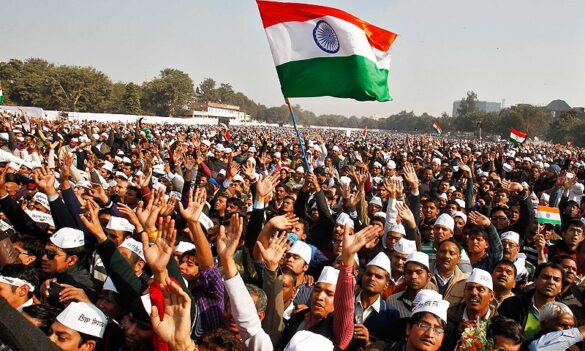 The anti-government protests that started on August 5 in India were a general protest in which the opposition party raised slogans against inflation and in favor of Indian Democracy.

But soon, the situation changed.

In India, there are protests against increasing unemployment, poverty, inflation, and many other important socio-political issues.

The weak opposition Congress has been fighting against the powerful Prime Minister Narendra Modi.

However, on August 5, when Rahul Gandhi was leading an anti-government demonstration, the police briefly detained him and his other associates.

Later Gandhi posted some pictures of his arrest and wrote that democracy in India is like a memory.

According to political experts, his tweet actually describes his helplessness in the current political situation and his desire to do something.

However, according to critics, a new change is being seen in Indian democracy, the signs of which are not good.

A crackdown on anti-government protesters has intensified, with Rahul Gandhi trying to garner public sympathy.

Political analysts say that the situation has changed in such a way that if Rahul tries to exploit this opportunity in the right way, people may come with him.

While the people are angry with the political intolerance of the government, their trust in the judiciary has also decreased.

They are beginning to understand that now the judiciary is failing to keep a check on the government missionaries.

Attacks on the press and restrictions on freedom of expression are also a cause of concern for Indian citizens.

Besides, religious intolerance and the deteriorating situation of minorities are also becoming a question mark for Indian democracy.

Critics say that the situation has worsened, especially under the rule of nationalist Prime Minister Narendra Modi.

Extremism and extremist Hindu individuals and institutions have been allowed to play freely.

However, he said that his heart is not happy with the completion of 75 years of independence. He criticized the Modi government and said that Indian democracy has become sick.

Many domestic and foreign institutions have also said several times that democracy has suffered due to the policies made during the Modi era.

Coomi, the writer of ‘The Emergency A Personal History,’ added that democratic conditions are deteriorating day by day.

However, she clarified that she is not hopeless, “not everything is out of hand yet.”

Coomi, adopting a reactionary tone, said there is a need to strengthen democratic institutions at this time.

Expressing confidence in the judiciary, she said that now this institution can save the world’s largest democratic power from infamy.

Who Will Be The Next Prime Minister Of Great Britain?