What Is The Purpose Of State In Islam?3 min read 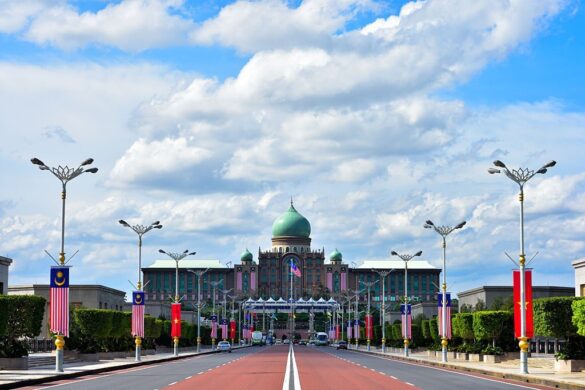 The purpose of the state in Islam is to ensure the application of Islamic laws and regulations in Muslim societies.

This includes protecting the rights of individuals and the collective interests of the community, ensuring justice and fairness, establishing peace and security, and providing public services such as education, healthcare, and social welfare.

The purpose of the state in Islam is to protect and promote the interests of the Muslim community and to ensure justice for all.

The state is responsible for enforcing Islamic law (Shari’ah) and ensuring that the rights of individuals and communities are respected.

The state also serves as a means of unifying the Muslim community, providing social and economic welfare, and maintaining public order and security.

Islam is a practical religion, and it does not believe in theories only. State in Islam is a compulsory political institution with various objectives.

The following points may explain the ends or purpose of the state in Islam:

In the Holy Quran, certain laws are known as ‘Hadoods’, and no one is allowed to change these laws.

It is the prime duty of the state to arrange for the implementation of these Divine laws or God’s commandments.

In the Islamic state, there is a legislature (Majlis-E-Shoora) to prepare rules to ensure the execution of the Hadoods.

Members of the Shoora must have profound knowledge of Shariah, for they are to deal with the Divine Limits or Hadoods.

The Islamic State is to implement Shariah (Divine Commandments, Sunnah and Hadiths).

The Islamic State cannot change the Hadoods, Hadiths or Sunnah.

The administration of justice is one of the crucial duties of the Islamic state.

The Holy Quran says, “Allah doth command you to render back your trusts to those to whom they are due. And when ye judge between man and man that ye judge with justice. Verily how excellent is the teaching which He giveth you! for Allah is He who heareth and seeth all things.” (4.58).

Further, “So, you should decide among the people through the law of Allah.”

Islamic state is established with the aim to provide everyone speedy justice without any distinction.

It is the Islamic state that is to protect the weak ones from the cruelties of the stronger through the system of justice.

Islam doesn’t stress justice but speedy, cheap and justice at the doorsteps.

Equality And Purpose Of State In Islam:

The primary thing in Islam is ‘Equality’ among human beings.

The Islamic State ensures no distinction or discrimination based on race, color, language, profession, wealth, etc.

According to the Holy Quran’s teachings and the Hoty Prophet’s sayings, one has no superiority over the other.

All human beings are equal in the eyes of the law, and the Islamic state ensures it.

The Islamic State will arrange to order goods and punish wrongs.

The Islamic State is to establish a smooth social system based on morality and a society full of fraternity, cooperation, sympathy and equal distribution of resources.

So, while analyzing the verses and the sayings of the Prophet (PBUH), it is concluded that one of the primary objectives of the Islamic state is to establish a system of preventing wrong and spreading good deeds.

Islam believes in human equality and dislikes the concentration of wealth in a few hands. Wealth focusing in a few hands produces class life in society, which negatively affects social setup.

Islam ensures the distribution of wealth through the collection of Zakat, which is one of the main functions of the Islamic State. Hazrat Abu Bakr adopted forcible means to collect Zakat from those who denied its payment.

The Islamic State must enforce the Usher and Zakat system, collect it in Bait-Ul-Maal, and distribute it among the needy.

Islamic state ensures the preaching of the basic elements of Islam. It is to ensure a regular system of prayer, establish and maintain places of worship, develop religious institutions, provide different kinds of stipends to its citizens, and ensure the preaching of Tawhid and the end of prophethood after Hazrat Muhammad (PBUH). It is to preach and enforce Shariah.

Welfare As A Purpose Of State In Islam:

The service of humanity and general welfare is the motto of an Islamic state.

To serve all without any distinction is the objective of an Islamic polity.

God and His Prophet (PBUH) order the rulers and servants of an Islamic society to serve their subjects.

To provide basic necessities of life to all to a maximum extent, to hear the complainants, to establish welfare institutions, to give special attention to disables, widows and orphans, to discourage slavery and exploitation, to guarantee education and health services and to standardize human lives etc. are the vital aims.

Jihad As A Purpose Of State In Islam:

Islamic state is to defend its citizens and protect them from external aggression.

Hazrat Umar Farooq kept a regularly trained army. He had established cantonments, regular salaries and other facilities for the soldiers.

On the other hand, Islam emphasizes jihad to fight for Allah. Islamic State is to maintain a well-equipped and well-trained army to protect Islamic society from its enemies and to use the sword against the conspirators and enemies of Islam.

In Islam, special attention is given to the rights and obligations of the citizens.

Islam declares a unique and very practical charter of human rights. It is the prime responsibility of the Islamic state to provide and safeguard fundamental human rights to its Muslim and non-Muslim citizens.

On the other hand, the Islamic State imposes specific duties on the citizens and strictly observes the system of obligation.

To sum up the topic, we may say that the Islamic state is basically to make an environment where the citizens can spend an honorable life in this world and prepare themselves for the Hereafter or eternal life after death.

Eight Years Of APS Tragedy : ‘Wounds That Can Never Heal’