Violence In Iraq Due To Political Deadlock3 min read 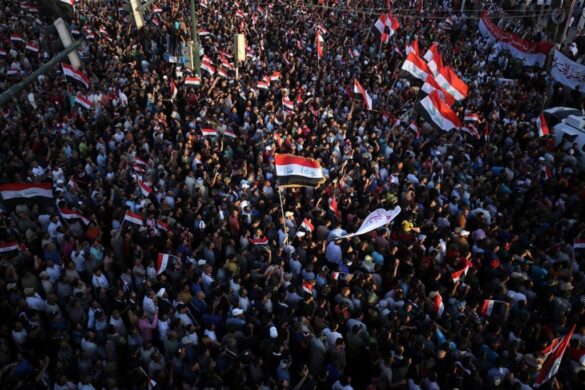 So far, about 20 people have been killed and more than 300 injured.

Iraq’s influential Shiite leader, Moqtada al-Sadr, announced earlier this week that he was withdrawing from politics and closing all of his institutions due to the country’s ongoing political stalemate, which has since seen his angry supporters take to the streets.

At least 20 people have been killed and 350 others injured in the ongoing violence.

Violent protesters also stormed the Republican Palace, a government building located in the Green Zone, a high-security area in Baghdad.

There are also reports of the death of two Iraqi soldiers in the bloody clashes.

Security forces fired tear gas shells to disperse the protesters. The violence has spread to other parts of the country.

Why Did Muqtada Al-Sadr Announce To Quit Politics?

Muqtada al-Sadr said in a statement on Twitter, “I have decided not to participate in political affairs. I now finally announce my retirement from politics.”

Muqtada al-Sadr has played an important role in Iraq’s politics for a long time.

However, he also laments the lack of support from fellow Shia leaders for his calls for reform.

Without giving a reason for closing his offices, Al-Sadr said that some of his cultural and religious institutions would continue to function.

This is not the first time that Muqtada al-Sadr has announced his retirement from politics, leading his critics to say that his announcement was aimed at political gain.

As reports of clashes between his supporters and opposition groups began to emerge, Muqtada al-Sadr announced a hunger strike.

He said he would continue his hunger strike until the clashes stopped.

Curfew Due To Violence In Iraq

He appealed to the security forces and the army or armed officials to “refrain from firing on the protesters.”

The United Nations Assistance Mission in Iraq (UNAMI) described the violence in Iraq as extremely dangerous.

It advised all parties to refrain from any action leading to an endless chain of unpleasant events.

The United States has also called for dialogue between the warring political parties in Iraq so that the situation remains peaceful, political differences do not turn into violence, and the current tension does not turn into further instability.

The United States has denied reports of the evacuation of the American embassy in Baghdad.

ISadr’s party emerged as the largest party in parliamentary elections in October but failed to form the government.

He refused to hold talks with his Iranian-backed rivals, which has since engulfed the country in political uncertainty.

To bolster his political interests, al-Sadr has combined his rhetoric with a nationalist and reformist agenda that appeals to supporters from the poorest sections of Iraqi society and historically excluded from the political system.

Biden’s Emphasis On Dialogue To End The Violence In Iraq

He emphasized national-level talks to end the political impasse on the phone call.

The White House said that Biden and Kadhiimi “welcomed the return of security to the streets and all Iraqis.” Calling on leaders to join the national dialogue to find a common path forward in accordance with Iraq’s constitution and laws.”

Biden said he supports a sovereign and independent Iraq. The US comments come when Iran’s influence in Iraq has grown significantly since the US invasion in 2003.

On Monday, Muqtada al-Sadr announced his retirement from politics. After which his supporters protested, and some even stormed government buildings during the protests.

At least 30 people were killed and around 570 injured in clashes between rival factions in Baghdad’s Green Zone. Sadr’s followers retreated after the Shiite cleric appealed for peace and tranquility.

Oil-rich Iraq held general elections last October, and due to the failure to form a government, the country is still without a formally elected government.

After the massive anti-government protests of the past years, the voters in the last election were so disaffected that the votes were very low.

After Moqtada al-Sadr’s lawmakers resigned from parliament, it was up to Iranian-backed parties to try to form a new government with Sunni and Kurdish parties. However, it is unclear what will happen next.

Iranian-backed parties have dominated Iraqi politics since the 2003 US invasion that toppled the government of former President Saddam Hussein.

But many in the country also see those parties as the root of many of Iraq’s long-standing problems.

Mass demonstrations with potential violence in Iraq have been Muqtada al-Sadr’s political tactics.

In 2016, his supporters organized a rally in the green zone of Baghdad. This area is very important in terms of security and is home to government buildings.

Iraqi leaders, especially those close to Iran, now also fear that Muqtada al-Sadr may use his working-class Shia base to overthrow political leaders in the future.

And now, there are fears that if Muqtada al-Sadr’s rival, former prime minister Nouri al-Maliki, returns to power, the political scenario could become even more dangerous.