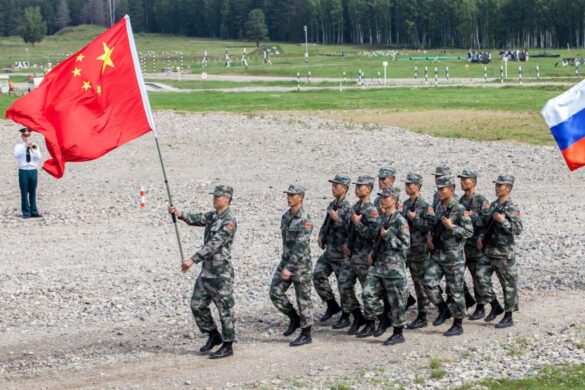 Several countries of the former Soviet Union and India will likely participate in Vostok 2022 Exercises in Russia’s Far East.

Beijing maintains that its involvement has nothing to do with tensions over Ukraine and Taiwan.

Russia’s Defense Ministry said that it would hold large-scale military exercises in the east of the country. China as well as several other countries will participate.

According to the announcement, the Vostok 2022 exercises will begin on September 1 and continue for seven days.

The Ministry of Defense further said that the foreign troops participating in the exercises have already arrived at a training center in the coastal Primorye region.

They have also started receiving military equipment and weapons in preparation for the exercises.

These combat exercises will be conducted in seven firing ranges in Russia’s Far East.

Moscow added that the Russian and Chinese navies in the Sea of ​​Japan would “exercise joint operations in maritime communications, economic activities at sea, and support for land forces in coastal areas.”

The Russian military stressed that the pre-arranged combat training would continue despite the Russian invasion of Ukraine.

Defense Relations Between Moscow And Beijing

Defense ties between China and Russia have been strengthening in recent months amid tensions over Russia’s invasion of Ukraine and US support for Taiwan.

China has blamed Western “provocation” for the war in Ukraine and openly opposed Western sanctions on Moscow.

He said US support for Kyiv and Taipei was part of efforts to fuel global instability.

But Beijing says its participation in the joint military drills “has nothing to do with the current international and regional situation.”

The last such exercises were held in 2018.

On the other hand, the US State Department says that it “has not read anything” regarding these exercises.

In recent years, joint exercises between Russia and China have continued, including military exercises in the Sea of ​​Japan and the East China Sea.

Last year, for the first time, Russia deployed its troops on Chinese soil for exercises.