Will Imran Khan Be Dangerous After Removal From Power?3 min read 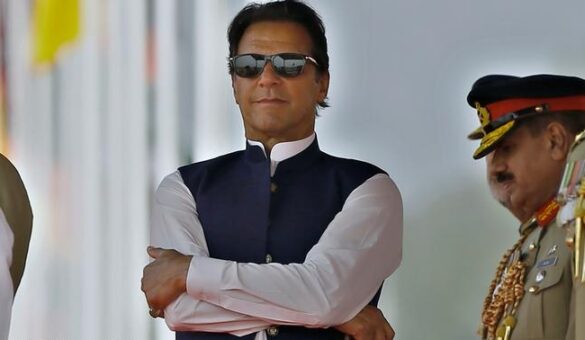 “I will be more dangerous if I do not stay in government and come to the streets.”

Imran Khan had said these words in the days when the combined opposition had settled the matter of overthrowing the PTI government.

However, it was unclear how Imran Khan would be removed from the government and what procedure would be adopted.

It was said (and later proved correct) that due to differences over the appointment of a new DG ISI last year, Imran Khan and the Establishment not only did not stay on one page but turned in opposite directions.

Imran Khan realized the situation and said that ‘I am the only option’ and would be more dangerous if removed.

Then from March 7 to April 10, from the presentation to the passage of the no-confidence motion against the Prime Minister, what happened in the corridors of power on Islamabad’s Constitution Highway, added another chapter in the political history of a country full of conspiracies and relentless use of force.

Imran Khan showed strong resistance in the whole process of ousting from power.

As a result, he was well-received by his supporters. This was evident by the ‘voluntary demonstrations’ filled with excitement across the country after his removal.

Moreover, overseas Pakistanis in the world’s major capitals and cities have expressed solidarity with him.

It is an indication that despite difficult circumstances, rising inflation, and unemployment, his narrative is gaining strength.

The narrative is that of him not only trying to improve the situation but also counting himself among those leaders who considered the future of Pakistan bright only in independence and sovereignty and sacrificed their lives to achieve those goals.

Is Imran Khan Seeing His Fate Like Zulfiqar Ali Bhutto?

Of course, there is depth in the impression that Imran Khan has chosen for himself the same path that Bhutto took in 1977.

Zulfiqar Ali Bhutto believed that Pakistan could have friendly relations with the United States and Russia (then the Soviet Union) while maintaining close ties with China.

Zulfiqar Ali Bhutto had mentioned the white elephant in the conspiracy against him, threatening him with dire consequences in return for continuing the nuclear program.

Instead of calling him a white elephant, Imran Khan has directly mentioned America and called his political opponents Mir Jaffer and Mir Sadiq of today and announced to take the matter to the people.

The decision to resign from the National Assembly shows that Imran Khan is making completely unconventional political decisions, which is a case in point.

The basis of such decisions, on the one hand, is his outlook on life and, on the other hand, the public acceptance of this style of politics.

These are the factors playing a major role in making Imran Khan more and more dangerous on a daily basis.

One of Imran Khan’s far-sighted ploys seems to be that he has not yet directly named anyone on his expulsion from the government.

He has not called the courts “shiny” and did not mention “Midnight Jackals” but left the matter to the public’s understanding.

So, he has begun to push for a general election as soon as possible to get their decision.

Imran Khan’s confidence and determination that he will defeat the parties of the present coalition government, who are suffering from contradictions, alone in the next elections with full and dynamic public support, makes him dangerous for the opponents.

The fact that the powerful institution of the Army is popular and that the courts cannot ignore the public opinion on the streets also makes Imran Khan the most dangerous in the eyes of political opponents and supporters of the status quo.

Can Pakistan pay the price?

This raises the question of whether Pakistan can pay the price for the adventurism of political leaders?

So, one of the reasons for this is that in the last seven decades, Pakistan has only been able to move forward in constitutional, institutional, and political awareness when it had the ‘Adventurous and dangerous leadership.’

Whereas the wheel of progress remained stalled when the pro-status-quo ideological leadership was given a ‘controlled mandate’ to make political decisions.

If the people are involved in political decisions, they also bear the burden of its ownership.

Otherwise, Pakistan’s history is full of decisions taking place in closed rooms, which no institution or even the leaders of such institutions are ready to take ownership of today.

It is dangerous for Imran Khan to be dangerous.

If it receives more dangerous public support, it will be the most dangerous, not for Pakistan, but for the ‘status-quo’ that has prevailed for seven decades.

Corona Cases In The United States Continue To Rise