Russian Revolution Of 1905, Role Of The Mob4 min read 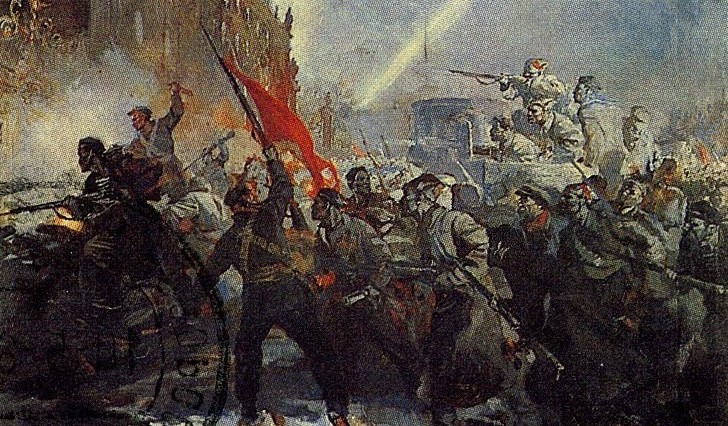 Before the Russian Revolution of 1905, political, social, and economic changes were taking place in Russian society.

Especially among the young elites who were against the authority of the monarchy. Western culture and ideas educated and influenced them.

They wished that to overcome Russia’s backwardness; it was necessary to change its system.

Restrictions on expression should be removed so that intellectuals can express their ideas freely.

To achieve this goal, they wanted to establish liberal and democratic traditions.

Politicians of different ideologies formed their own parties, which ran counter to Russia’s ancient traditions.

Before them was the society of Europe, where political parties were successful in the elections and went to the parliament and represented the people there.

There were democratic institutions that worked for public welfare. There was the rule of law; in its eyes, the rich and the poor were equal.

Role Of Institutions In The Russian Revolution

Educational institutions researched social and natural sciences. Peasants and workers could strike for their rights so that, in their view, Russia would have to look to the West to modernize.

As Tsar Peter adopted Western technology during his reign and exposed Western culture to the elite.

What was needed now was that the benefits of modernization spread from the middle class to the common people.

The reforms that liberals wanted to bring about were also related to a friendly society and culture.

For example, their demands were that there should be agrarian reforms and that farmers should get land.

They believed in adult suffrage but were against giving women the right to vote.

These members of the liberal class did not want to abolish the old system altogether.

However, they favored reforming it so that Parliament and the Tsar’s administration made decisions together.

Therefore, the tendency of the liberals was not towards revolution but towards reforms.

They loved the interests of their class but also wanted to give something to the people so their dissatisfaction could be removed.

Political Parties And The Russian Revolution

Professor Mark Steinberg has analyzed political parties while lecturing on the history of Russia on behalf of The Teaching Company.

These parties included both non-Marxist and Marxist parties. The manifesto of the Popular Party was first to promote education among the masses to develop political consciousness among them.

When these people went to villages, the farmers wondered who they were and who had come to teach them.

There was no understanding between them and the farmers. Therefore, despite all their efforts, these young people, with the passion and enthusiasm with which they rose, failed.

In contrast, the Socialist Party wanted to change society through revolution rather than reform. Their motto was to capture the state, to destroy the old system.

Workers, peasants, and people of deprived sections should be given their rights. They were also against capitalism and wanted to provide workers complete freedom to form unions and strike. In this political situation in Russia, every section of the society was dissatisfied.

On this occasion, the Russian government decided to go to war with Japan. It had two purposes. One was to instill patriotic feelings among the people during the war.

They used to contemptuously call the Japanese monkeys, but Japan defeated them in 1904.

It was a great disaster for the Russian people. A small eastern country defeated Russia, a large empire.

On the other hand, the victory of Japan encouraged countries of Asia and Africa, which were then colonies of the Western countries and where the whites ruled them.The power of the white nations was an assumption.

Therefore, this war caused a significant change in Russia and its colonies in Asia and Africa.

Start Of The Revolution

In 1904, a large gathering of factory workers took place, in which they presented their demands.

In January 1905, thousands of people gathered in Petersburg, including workers, professionals, shopkeepers, men, women, and children from all walks of life.

It was a tradition in Russian history that the people appealed to him instead of rebelling against the king to fulfill their demands because the king was like a father to them, whose duty was to protect his children and work for the welfare of the people.

So, the appeal written on this occasion read, “We appeal to you to do justice to us as we have not been able to serve our children and aged parents. Food prices and diseases have made us poor, destitute, and weak. “

The mob wanted to present this appeal to the Tsar, who was not at Winter Palace at the time, but the congregation demanded that the appeal be delivered to the Tsar.

Thousands of people, including women, children, the elderly, and workers from different political parties, participated in the gathering.

The congregation also carried icons of saints and other religious symbols. By all accounts, it was a peaceful procession.

The military did not allow the crowd to reach Winter Palace and opened fire to stop it, killing several people and injuring several hundred. The assembly could not present its appeal to the Tsar.

After this action of the army and the dispersal of the crowd, the people became very disillusioned and lost hope that the Tsar would give in to their demands peacefully.

Therefore, there was a tendency among the people that change could be brought only through armed struggle.

Since then, protests had started across the country. Workers, students, political activists, and common people participated in these protests.

They ended all expectations from the Tsar’s government. Therefore, the revolution of 1905 became a precursor to the Russian Revolution of 1917.

Lessons Of The Revolution

This makes it clear that if the peaceful demonstrations of the congregation are fired upon, it will never bring stability to the government.

The second is that when the congregation’s people are massacred, the government will not be able to win the people’s hearts.

The third important thing is that if the reforms are timely and in the interest of the people, then they have an effect.

But when the situation deteriorates, and the reforms are brought to light, they fail, and the people lose confidence in them.