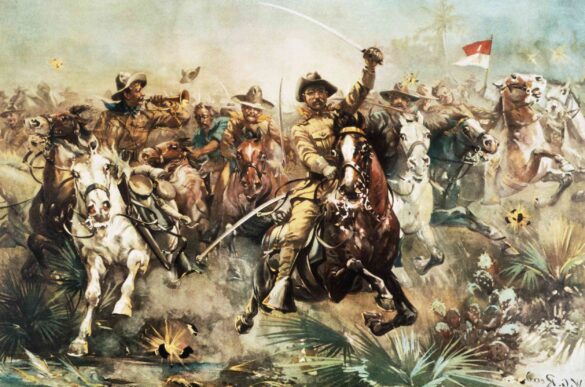 Throughout history, tribes have settled their disputes through wars and weapons.

Negotiations and diplomacy were used to make decisions based on giving and taking.

But after the defeat in the war, the loser would accept all the conditions of the winner.

Therefore, the victorious nation also got booty, enslaved the prisoners of war, seized their lands, and collected taxes from the farmers.

Success in war depended on the size of the army and the weapons used.

So, everyone tried to invent as many deadly weapons as possible.

From stone weapons to the development of nuclear weapons, this trend continued.

Early Days Of Wars And Weapons

In the early days, soldiers were on foot. After many experiences, they started to line up.

The weapons used included swords, spears, bows, and shields. Greek, Roman, and Iranian armies marched on foot and fought under a general.

Wars have always been the cause of bloodshed and carnage.

Nomadic tribes first used horses in wars. They used to be the best riders. Because of this, their armies moved rapidly from one place to another.

The Mongols were so adept at horseback riding that they would turn on horseback and shoot arrows at the enemy when their rivals pursued them.

Other nations learned from them how to use horses in the army. Their horses were lean and agile and extremely fast.

When the Knights came into existence in Europe, they also started using horses. When they went to war, they wore heavy armor for protection.

Therefore, their horses were fat and healthy to carry this load and did not accelerate.

When the Aquitaine War broke out between England and France, England’s archers were on a high hill.

It rained heavily on the battlefield, causing French army horses to get stuck in the mud.

When they dismounted, their heavy armor sank into the mud. The British troops rained down arrows and destroyed the Knights of France.

Apart from horses, the other important fighting animal was the elephant, as used in wars.

Hannibal invaded Europe with these elephants. He even passed those elephants through the mountains of the Alps, his major feat.

When the Romans besieged Carthage at the Battle of Zama in 202 BC, Hannibal came to the battlefield with three hundred elephants, but now the Roman general was familiar with elephants.

Elephants were also used in the war in India. They were trained for this purpose. Their Mahouts controlled them because sometimes it happened that elephants would turn around and trample their own soldiers.

It was customary in India for the ruler or general of the army to ride on an elephant to the battlefield so that he could watch the battle from there and the soldiers could fight valiantly in his presence.

But riding on an elephant was also dangerous because the enemy’s arrows or ammunition could easily hit him.

If he got off the elephant and mounted a horse and his soldiers could not see him on the elephant, their spirits would drop, leading to defeat.

It is said that when the battle of Samogarh took place between Dara and Alamgir, Alamgir put chains on the legs of his elephant so that the elephant could not run away.

While under a conspiracy, Dara was asked to leave the elephant ride and ride the horse.

When Dara’s soldiers did not see him sitting in the elephant, they thought he had either been killed or escaped. It turned the war into their defeat.

Entry Of Ammunition In Wars

Ammunition was invented in China in the 9th century AD, and they used it in fireworks.

But when the invention reached the Ottoman Turks and Europe, it was developed and used as cannon balls.

Because of their use, cannons had to be molded, which was made possible by skilled craftsmen.

So, European rulers got cannons and ammunition, which the feudal lords did not have.

That is why in history, this process is called Gunpowder Empire.

So, gunpowder empowered the kings of Europe.

When the rulers fought among themselves and the forts were attacked, two walls were built in the fort to counter it so that if the first wall was broken, the second wall could stop the invaders.

When Sultan Muhammad the Conqueror invaded Constantinople in 1453, he fired large and heavy cannons.

These artillery shells broke through the walls of Constantinople, and Turkish troops entered the city and captured it.

When Babar invaded India, he brought his artillery to the first battle of Panipat in 1526, which led to his victory.

In South America, the Spaniards also used artillery and ammunition against the natives, wiping out enemy forces.

The development of lethal weapons has continued ever since. With the advent of World War I came tanks, cannons, shells, aerial bombs, and rifles, and even a nuclear bomb was invented during World War II.

Despite all the bloodshed and destruction of the wars and weapons, man has so far barely had some time for a peaceful life, in which he could spend days of joy and happiness.