Floods In Pakistan, Deaths More Than A Thousand4 min read 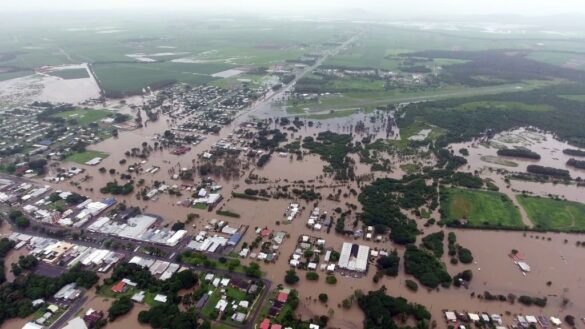 According to the data released by the country’s National Disaster Management Authority, the number of deaths from floods in Pakistan has exceeded 1,000.

NDMA has said that 119 more people have died in the last 24 hours while heavy rains are continuing in different parts of the country.

The annual monsoon is essential to irrigate crops and fill lakes and dams across the subcontinent.

But every year, the monsoon rains in this South Asian country bring massive destruction.

One in seven Pakistanis has been affected by the disaster this year. And nearly a million homes have been severely damaged.

NDMA further said that the crops grown on two hundred thousand acres of land have also been affected.

Apart from this, 3,451 kilometers of roads and 149 bridges have also been washed away.

Declaration Of Emergency After Severe Floods In Pakistan

Two months of rains during this year’s monsoon led to severe flooding in most parts of the country.

Prime Minister Shahbaz Sharif has appealed for international assistance while declaring a state of emergency.

Over 1,000 people have been killed in devastating floods caused by monsoon rains in most parts of Pakistan since June.

The new death toll was announced a day after Prime Minister Shahbaz Sharif declared a state of emergency. He also called for international help to deal with the disaster.

Aid workers are struggling to evacuate millions of citizens trapped in flood-hit areas.

The situation will likely worsen as the rainy season is two weeks away.

The National Disaster Management Authority has said that the death toll rose by 45 in the 24 hours before yesterday.

Many rivers in Khyber Pakhtunkhwa province have burst their banks in the past few days. And washed away several buildings, including a popular hotel.

Road access from the Kalam Valley to the rest of the province has been cut off. Power and communication systems have also been badly affected.

The spokesman of the Khyber Pakhtunkhwa government, Kamran Bangash, says that the sudden floods in the Swat River have severely affected the area.

According to him, the people of the Charsadda and Nowshera districts had to move to government buildings, given the danger.

In Charsadda, the high volume of water destroyed the gates of a large water control system in the Swat River, flooding Charsadda and Nowshera districts.

An official in Pakistan’s vastly underdeveloped province of Baluchistan said all 34 districts had been badly affected, with road networks destroyed and bridges washed away.

According to official data, around three hundred thousand houses have been destroyed due to heavy rains and flood lanes.

Several roads are impassable while electricity is unavailable in the affected areas, affecting millions of people.

On the other hand, the train system across the province has been affected while several major highways have been closed.

In Sukkur, agricultural land irrigated by the Indus River is also flooded, and tens of thousands of people have sought refuge on relatively elevated roads and highways.

Currently, 23 districts have been declared disaster-affected in Pakistan’s Sindh province.

This year, the disastrous monsoon rains have left the entire country with a flood situation.

It is also being told that 450 billion rupees have been lost in Sindh province, including properties, roads, houses, businesses, and crops.

The provincial government has released this estimate of damages in a preliminary report. But the financial loss could be much higher.

According to the data released so far, more than 5 thousand 715 villages have been submerged.

More than 150 Thousand slum houses have been affected, and helpless people are now sitting on roadsides for help.

Authorities ordered thousands of residents in high-risk areas to evacuate their homes because of the threat of flooding and continued rains.

Federal Information Minister Maryam Aurangzeb has said that military and rescue organizations are trying to help and protect people in many districts of Sindh in the south, Punjab in the east, and Balochistan in the southwest of the country.

“The government has sanctioned sufficient funds to compensate the affected people financially. We will not leave the people alone in this difficult time,” he added.

Officials of the Pakistan Army, other rescue agencies, and volunteers of various welfare organizations are busy shifting the flood-affected people to safe places while arranging accommodation and food for the flood victims.

Floods In Pakistan, An Environmental Disaster

She said in a statement on social media that Pakistan is facing a severe environmental disaster which is the worst in decades.

She further said that Pakistan is currently on the frontline of the disaster caused by climate change.

The unusual monsoon season in Pakistan has affected all four provinces of the country.

She further said that climate change is a global crisis. Better planning and sustainable development will be needed in such situations.

Situation At The Motorways After Floods In Pakistan

The Motorways Police has expressed fears of flooding of motorways and highways due to floods in different areas.

According to the statement issued by the spokesman of the Motorways Police, people should not travel to the areas where highways are feared to be flooded due to floods.

The statement said that in Khyber Pakhtunkhwa, there is a risk of flooding on the national highway between Azakhel and Nowshera.

Similarly, there is a risk of flooding on the M-1 motorway from Burhan to Peshawar.

According to the spokesman, there is a fear of flooding from Kalat to Pishin Yaro on the national highway in Balochistan.

Hub to Bela and Bostan to Dulsora on the National Highway may also be inundated due to floods.

With reference to Sindh, it has been said that Kund Yaro, Moro, and Skarund on the national highway are in danger of flooding.

Visits Of The Prime Minister

In such a situation, the Prime Minister of Pakistan, Shahbaz Sharif, visited the flood-affected areas in the Jafarabad district of Balochistan.

Meanwhile, the Prime Minister also distributed relief materials to the citizens by helicopter.

Shahbaz Sharif also visited the relief and medical camp to help and rehabilitate the flood victims in village Hajiullah Dino of Jafarabad.