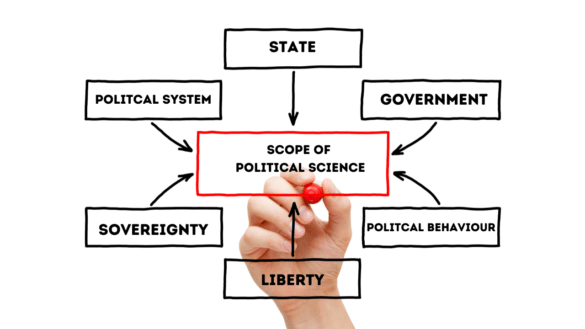 It means to explain the topics, Which are under the study of this subject.

Shortly speaking, its areas of study or contents or scope is as follows:

The basic element studied by Political Science is the State, and thus it is studied in detail.

It studies the past historical background of the State, i.e., Its Origin, Development, and Evolution, because the State is a dynamic institute.

Past is known in order to plan the present and future of the State.

This discipline also discusses the present conditions of the State, mainly its composition, forms, organization, machinery, and its relations with the composing subjects.

It is to study the role and status of States in global relations. Comparative study of the past is made, and the facts and findings are generalized to apply.

Political Science studies the past and present events of the States that enable a political scientist to reform and remodel the State according to the changing conditions and wants of the citizens.

In this discipline, all those things, elements, and factors are studied which are directly or indirectly related to the State.

It is the government that Legislates, Executes, and Adjudicates.

In Political Science, the organs of the Government, Forms, Organization, Functions, Policies, Essentials, and Dynamics are profoundly studied.

It is to study government from different angles, and all its inner details are exposed to the students.

While defining Political Science, we say that it is the science of State and Government.

So, it studies State and Government scientifically, and all their related elements are studied.

If one explains how a state is run, he is to talk about the political system.

Political parties and groups spread views of general importance, and maximum support is to be obtained.

These demands are kept before the government that are considered by the government’s organs and are given to people in the form of decisions and policies.

People then show their reactions. So, it. It is an entirely political process in a cycle of a political system.

Political behavior is an essential factor influencing politics. Because of the increasing significance of politics, modern political scientists have gone. They are going through internal and minute factors and dynamics like political behavior, system analysis, political process, etc.

Similarly, a subdiscipline, Comparative Politics in Political Science, has emerged.

Human psychology, nature, and tendencies are to influence or shape the course of politics; therefore, while studying politics, human attitude or behavior cannot be ignored.

Political Science basically studies the theory while politics is its practical use.

A political scientist studies politics, and in the light of his observations, findings, and research, he develops a sort of philosophy or political theory.

The formation of a theory is a step in scientific research, and a theory may be proved true or false after further research.

This is the reason why Political Science is not like physical sciences.

The political theory explains the nature and function of the State and political system.

A theory also deals with the government, justice, liberty, etc.

In Political Science, various theories and ‘isms “such as Socialism, Communism, Nationalism, Constitutionalism, Capitalism, etc., are studied in detail.

Sovereignty is the Super-Most Power of the State. It shows the degree and level of independence of a country and its control over its citizens.

In Political Science, its kinds and main principles are analyzed and studied. Various theories presented regarding sovereignty and its nature are also studied in detail.

Study of Rights, Duties, and Liberty:

Political Science does not study State and Government only but deals with liberty, rights, and duties.

It discusses the nature of liberty of individuals and the degree of State interference in the affairs of its citizens.

It explains the kinds and safeguards of liberty and its relations with rights and duties.

It explains the kinds and nature of rights and duties. Liberty, Rights, and Duties are the most important topics of Political Science. It produces awareness about rights and duties and ultimately produces good citizenship.

At the close of the 20th Century, a State or government is nothing without interrelation with the other States or governments.

Such interrelations have developed a separate subject: International Relations, which provides us information about Diplomacy, International Organizations, International Law, Treaties and Formulation and Implementation of Foreign Policy, etc.

It is necessary to study. And understand global politics to play our due role in developing global peace.

Various other institutions and factors that put life in the system are studied in political science.

There are various other factors, Which have widened the scope of Political Science. For example, the economic aspect. Communism, Socialism, and Capitalism are Economic-cum-Political Ideologies.

Ethics and religions are also playing a vital role in politics. In a religious society, religion is a dominant political factor.

So today, Political Science is studied with particular reference to religion.

The most important factor, which has expanded the scope of this subject, is “State Dynamism.”

With the increase of human problems and close interrelation, the State intervenes more and more.

With the expansion of State activities, the scope of Political Science has also expanded.

On September 11, 2001, the World Trade Center in New York and the Pentagon were attacked.

Al-Qaeda was allegedly responsible for these attacks. Coalition against terrorism was found led by the USA. That event changed global politics and brought vital changes in States’ policies.

Political Science is to study the impacts and aftermaths of 9/11.