What Issues Are Likely To Be Discussed? 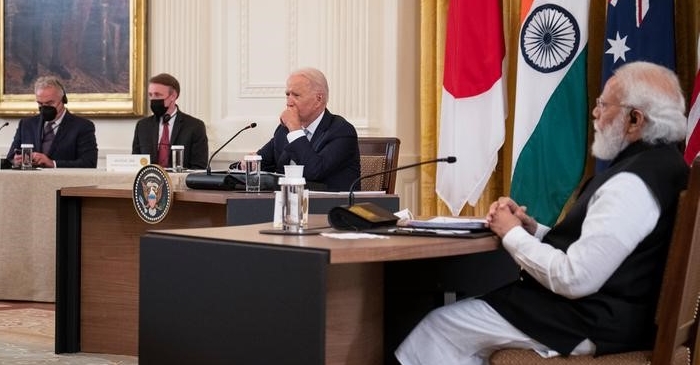 They are also expected to discuss Russia’s invasion of Ukraine and Indo-Russian relations.

A Foreign Ministry spokesman in New Delhi announced on Sunday evening that there would be online talks between US President Joe Biden and Indian Prime Minister Narendra Modi on Monday.

The talks between the two leaders are taking place at a time when the fourth phase of the ministerial-level two-plus-two dialogue between India and the United States is about to take place.

Indian Defense Minister Rajnath Singh and Foreign Minister SJ Shankar have arrived in Washington to hold talks with their US counterparts, Secretary of Defense Lloyd Austin and Secretary of State Anthony Blinken.

What Did New Delhi Say about Biden Modi Online Meeting?

The Indian Ministry of External Affairs issued a press release, “The two leaders will review the ongoing bilateral cooperation and the recent developments on global issues of mutual interest, including South Asia, the Indo-Pacific region.”

The statement added that the virtual meeting would further enable the parties to continue their formal and high-level talks to ” further strengthen the comprehensive bilateral strategic partnership.”

In the context of the new situation that has arisen on the world stage since the Russian invasion of Ukraine, this high-level political dialogue is being given much importance.

The United States has so far resented India’s diplomatic stance in this regard.

However, some observers in New Delhi say that there is no such bitterness in the private conversation between the two, and they are moving towards further improving their relations at all levels.

The Situation In Ukraine Will Be Discussed in Biden Modi Online Meeting.

White House spokeswoman Jen Psaki said that US President Joe Biden, during the talks, “Will continue to hold close consultations on the outcome of the Russian war against Ukraine and its mitigating impact on global food and commodity markets.”

She said the issues they will discuss include the elimination of Covid 19, tackling the climate crisis, strengthening the global economy, strengthening security and democracy, maintaining an international order based on free and open laws, as well as maintaining prosperity in the Indo-Pacific region.”

These include maintaining international order and maintaining prosperity in the Indo-Pacific region. “

The reference to “security, democracy, and prosperity” in the Indian Pacific is, in fact, an indication of China’s activities in the Indo-Pacific region.

Jen Psaki said the two leaders wanted to continue the ongoing talks on developing an economic framework in the Indo-Pacific region and providing high-quality infrastructure.

The United States and its Western allies have imposed sanctions on Russia over its attack on Ukraine.

However, there are currently no indications that India will reduce its trade and strategic ties with Russia.

It has recently struck several major deals with Moscow and is buying cheap oil from Russia.

The United States is unhappy with India’s attitude towards Russia and has been expressing concern.

Just a few days ago, US President Joe Biden had said that India was the only country in the quad which looked shaky against Russia, while the rest of the members had acted steadfastly.

However, observers in New Delhi say that such US statements and some warnings are meant to show the public and that there is no such bitterness in private conversations.

According to him, the United States needs New Delhi’s support to overcome China’s growing influence, so it wants to build a defense relationship with it in the region, ignoring all these aspects.

On the other hand, India’s longstanding position has been that it has good relations with both Russia and the United States.