QUICK POPS
Shahbaz Sharif Offer Of Talks To Modi, Will...
What Are Pressure Groups ?
Iran : Chances of More Repression or Reform...
How Was The Taliban Rule In Afghanistan In...
History Of Crime, Punishment And Prisons
What Is The US Patriot Defense Missile System?
Difference Between Western And Islamic Concept Of State?
What Is The Purpose Of State In Islam?
Eight Years Of APS Tragedy : ‘Wounds That...
The Battle For Influence In Africa, US Versus...
Asian PoliticsUS PoliticsWorld News 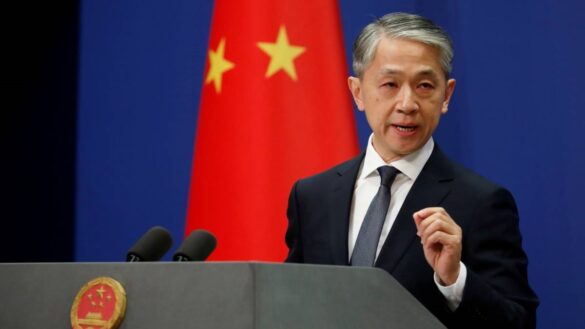 The US Secretary of State had warned that China could try to disrupt the international system.

China has sharply criticized US Secretary of State Antony Blinken’s statements. In which he sought to focus on the balance of power between the world’s two largest economies and criticized China’s policies.

Blinken said in his speech that the international community needs to unite to stop and counter China.

According to the statement, the United States considers China “the most serious and long-term challenge to the international system.”

A Chinese Foreign Ministry spokesman called the remarks “an attempt by the United States to spread false information and discredit China’s domestic and foreign policy.”

What Was China’s Reaction To Blinken’s Statements?

US Secretary of State Antony Blinken’s statements were not well received in Beijing.

Wang accused the US secretary of state of being “hypocritical” and said his statements were “fundamentally misleading.”

He drew particular attention to the idea that the US could persuade other countries to take a hard line against China.

He said most of the current international law is American or “inventions of a few other countries.”

China has taken a more aggressive stance and increased its military presence on artificial islands in the South China Sea.

It has also stepped up its rhetoric against Taiwan.

Chinese Foreign Minister is also visiting neighboring countries with a number of security proposals for peninsular countries in the South Pacific. Which is likely to further increase China’s influence in the region.

Washington is deeply concerned about all of Beijing’s actions.

What Did Blinken Say?

Speaking at George Washington University, US Secretary of State Anthony Blinken said, “China is a country that wants to use its economic, technical, military and diplomatic resources to fulfill its ambitions to move the international system forward according to its ideology.”

He spoke in support of the US Alliance but said that maintaining some independence was important for China.

The US Secretary of State said that Russia is a present and immediate threat to the global system. However, in the long run, China has more potential to destroy international security. “

The United States seeks to use all available means to counter and deter China. Including its many friends and allies and significant military and other resources.

US officials acknowledge that much needs to be done to curb China’s growing influence and goals.

The United States is interested in creating a strategic environment around China within which Beijing’s leaders can make their decisions.