The Battle For Influence In Africa, US Versus China And Russia2 min read 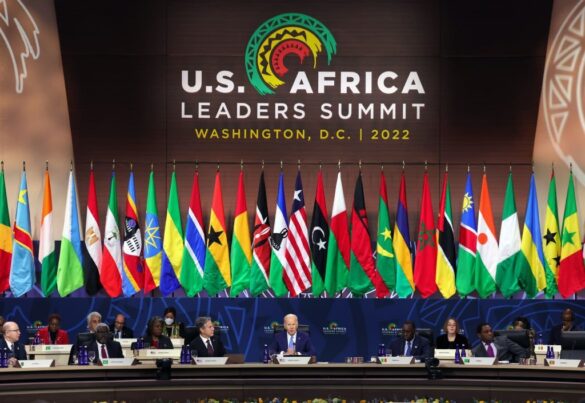 According to the US, China and Russia’s presence in Africa is getting stronger daily, which must be countered.

The US has rolled out the red carpet for the continent’s leaders and announced multi-billion dollar projects.

This is the first continental conference in the last eight years in which 49 African leaders have arrived in Washington to participate.

The US wants to reassert its influence in the mineral-rich continent of Africa and to achieve this goal, US President Joe Biden is engaging in personal diplomacy.

In a panel with several African presidents at the start of the three-day summit, US Defense Secretary Lloyd Austin charged that America’s regional rivals have different approaches and goals. By competitors here, he means China and Russia.

US Accusations Against China And Russia

Austin said China is leaving its footprint in Africa “on a daily basis” through its growing economic influence.

The US Defense Secretary said, “What is troubling is that there is no transparency in what they are doing and this creates problems that ultimately create instability.”

“Russia continues to sell cheap weapons and deploy mercenaries across the continent,” he added. In this way, instability is being created.

But the Biden administration is taking a cautious approach in this regard. He is reluctant to tell African leaders to either come with us or join China and Russia.

The Biden administration believes that China has embarked on massive infrastructure projects in Africa and cannot be stopped now.

America Will Compete With Investment In Africa

President Joe Biden plans to invest $55 billion in Africa over the next three years. In its first announcement, the White House said the United States would invest $4 billion through the fiscal year 2025 to train African health workers.

The American space agency NASA was also brought to this summit. Nigeria and Rwanda have become the first African countries to sign the ‘Artemis Treaty’.

The US seeks international support for missions to the Moon, Mars and beyond. The Artemis Treaty includes European allies, Japan and several Latin American powers.

The US is rapidly expanding the space program at a time when China is quickly advancing in space projects and technology.

And the ‘US-Russia space cooperation’ is under threat due to deteriorating relations with Russia.

On the other hand, China has rejected US criticism of its role in Africa. Chen Gong, the Chinese ambassador, posted in Washington, has said that the continent of Africa should not become a field of “competition between the great powers”.

Meanwhile, Chinese Foreign Ministry spokesman Wang Wenbin told reporters in Beijing on Wednesday. “Washington should respect the will of the African people and take concrete steps to help Africa develop. Instead of defaming other countries”.

This is the first ‘US-Africa summit’ since Barack Obama invited African leaders in 2014. Former President Donald Trump’s lack of interest in the continent of Africa, was not hidden from anyone.

But now the situation is changing once again. The Biden administration has emphasized working with the African Union on security and diplomatic fronts.

During a speech, Biden will outline US support for the African Union to formally secure a place in the G20 club of the world’s 20 largest economies.

The US recently demanded that there should also be a permanent African seat on the UN Security Council.

The head of the African Union, Moussa Faki Mahamat, praised the US support but warned that the US is still focused on fighting extremists in the Middle East.

“This double standard is destructive to peace and democracy in Africa and the world.”

Eight Years Of APS Tragedy : ‘Wounds That Can Never Heal’