QUICK POPS
Low Foreign Exchange Reserves , Is Pakistan Going...
Will The New Military Leadership Be Able To...
Anwar Ibrahim: Malaysian Opposition Leader Is The Country’s...
Space Supremacy: Which Country Owns The Moon?
NATO: Political And Military History
Why Is The Appointment Of Pakistan’s Army Chief...
Honorary Diplomats And The Abuse Of Diplomatic Status
Trump Announces To Enter The Presidential Contest Of...
G20 Summit : Participating Countries At Odds
The World’s Population Has Reached Eight Billion Mark
US Politics

Trump Announces To Enter The Presidential Contest Of 20243 min read 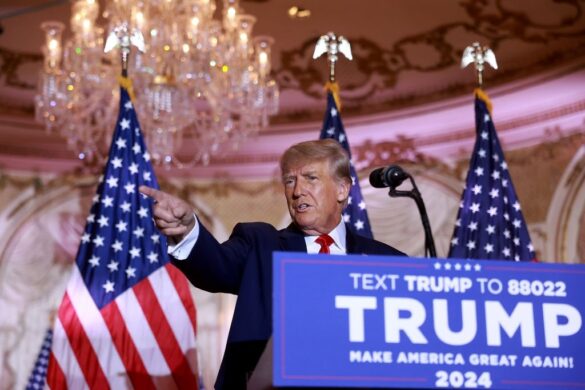 From the moment Trump stepped down almost two years ago, speculation was rife that he intended to return.

The former president, while announcing it, has now confirmed it.

Former US President Donald Trump announced on Tuesday, November 15, that he wants to return to the White House.

And for that, he intends to compete in the 2024 presidential election.

“Tonight I am announcing my candidacy for President of the United States.” The former president told an audience at his prestigious private residence, the Mar-a-Lago Club. The return of America is just beginning.”

The day before the announcement, his aides filed documents with the US Federal Election Commission and formed a committee called “Donald J. Trump for President 2024”.

During his speech, Trump defended several of his controversial policies on ending trade deals, foreign policy, border control, and handling the coronavirus pandemic.

“In four short years (of Trump’s presidency), everyone was doing great,” he said.

Trump also claimed that the United States had enjoyed “decades” of peace during his one-term presidency.

He also said that China had meddled in the 2020 election, due to which he lost.

Trump also claimed that Biden’s legacy began to suffer after he took office.

He cited events such as rising inflation in the United States, skyrocketing gas prices, energy shortages, the potential loss of border controls, and the withdrawal from Afghanistan.

Trump said, “Joe Biden’s two-year term has been a difficult and frustrating time for millions of Americans.”

The former president claimed that if he had been in power, Russia would never have invaded Ukraine.

He defended the vote in favor of Republicans in the midterm elections. Even though his party has failed to take control of the Senate.

However, he said that two more years of Biden’s term will open the eyes of voters and they will understand the benefits of Trump’s presidency.

Trump has been known to criticize immigrants, saying that “we are being poisoned” and claiming that the crime wave in American cities has created “pools of blood.”

He promised to reduce the death penalty for drug traffickers and term limits for lawmakers. He also said that if he comes back to power, he will reinstate the soldiers who were fired for not getting the Covid-19 vaccine.

Speculation has intensified in recent months that Trump plans to run for president again.

However, his announcement comes at a time when the candidates he supported in last week’s mid-term elections have made a disappointing showing.

Many Republicans would blame him for causing the Republican Party to perform worse than expected.

Some in the party want a change in leadership, and many are looking to Florida Gov. Ron DeSantis for that.

Gov. Ron DeSantis won a landslide victory in the recent midterm elections, so many leaders want to see him as the next Republican candidate in 2024.

President Joe Biden responded to Trump’s announcement on Wednesday, saying he had “failed” his country while in office.

“Donald Trump has failed America,” he said in a tweet.

Biden’s tweet was accompanied by a video in which Trump was accused of “faking the economy for the rich, attacking the health department, fostering extremism, attacking women’s rights, and inciting violent mobs.” And it was said that with its help, he was trying to defeat Biden in the 2020 elections.

Trump left office at the end of his term, claiming without evidence that Joe Biden had won the election due to vote rigging.

Honorary Diplomats And The Abuse Of Diplomatic Status