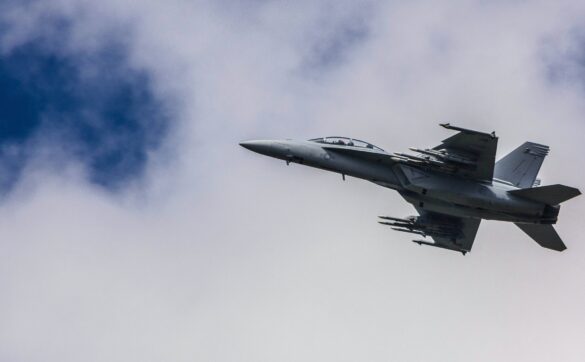 Pakistan’s Federal Interior Minister Sheikh Rashid has announced a fly-past of a squadron of Chinese-made fighter jets J-10C on the occasion of the Pakistan Day Parade on March 23 this year in the federal capital Islamabad. Since these reports, there has been a debate in the defense circles of Pakistan and India whether Pakistan is buying these fighter jets or their participation in the parade is merely part of a strategy.

According to the views and comments of Pakistani officials and experts, if these modern fighter jets become a permanent part of Pakistan’s defense forces, not only the role of the Pakistan Navy in the Arabian Sea is likely to be expanded, but Pakistan’s maritime borders’ defense will also be strengthened.

Statements coming from the corridors of power have raised eyebrows over the deal to buy two squadrons of J-10 fighter jets from China, whether the agreement has been reached or not. The federal government is probably interested in unveiling the Chinese-made J-10 fighter jets at a parade on March 23 this year, which it intends to present as its “political success.” But the participation of these planes in this parade does not mean that these planes will fly past as Pakistani property.

Experts say; that does not seem possible because the two countries have not yet reached a formal agreement on the aircraft. However, according to a source, “The possibility of all this happening immediately, cannot be ruled out.”

Pakistan has a long tradition of displaying its military weapons and equipment in the March 23 parade. The exhibition is usually for the enemy and shows its friends what Pakistan’s capabilities are and what kind of military strength it has. A Pakistan Air Force (PAF) spokesman declined to announce that two squadrons of J-10 aircraft would take part in the March 23 parade.

Earlier, however, Interior Minister Sheikh Rashid had announced in this regard which was published prominently in the Indian media, and it was claimed that Pakistan was buying these planes. A government official said no deal had been reached so far on the purchase of the fighter jet.

Even in the last days of Musharraf’s government, Pakistan announced that it would buy J-10 aircraft from China, but the project was put on hold due to economic difficulties. Even in those days, this announcement was made by Sheikh Rashid, who was then part of the cabinet consisting of PML-Q ministers.

Experts think that since Sheikh Rashid’s current ministry has no involvement in these matters, nothing can be said with certainty about the veracity of his statement regarding the purchase of J-10 aircraft.

The second reason is that the Pakistan Army has recently acquired HQ-9 surface-to-air missiles capable of keeping Indian-purchased Rafale aircraft away from its territory. Sheikh Rashid had claimed that J-10s were being procured to compete with Indian Rafale aircraft.

When these HQ-9 missiles were added to the Pakistan Army’s arsenal in October 2021, the Army Chief had said that Pakistan’s defense had become invincible due to the dangers posed by the acquisition of these state-of-the-art missiles.

According to experts, J-10 fighter jets can play a crucial role in defending maritime borders. They say that HQ-9 is so effective that it cannot allow any Indian fighter jet to enter Pakistani airspace.

But on the other hand, the purpose of the exhibition of J-10 aircraft is actually because there is a lot of excitement and discussion in the Indian Army and media circles about the inclusion of Rafale fighter jets. “Pakistan wants to reject Indian propaganda through its celebrations,” said one expert.

According to experts, the J-10 aircraft is well suited for maritime roles, especially in the light of the new thinking of the Pakistan Navy to try its luck in the deep waters of the Arabian Sea. There is no aircraft in Pakistan’s existing aircraft that has the best capability to carry out operations in maritime space.

According to experts, the Pakistan Navy has redesigned its ‘Strategic Thinking‘ to play its role in the depths of the Arabian Sea. “J-10 will play a very effective and efficient role in fulfilling this role,” said one expert. J-10 aircraft are equipped with effective ship destroyer missiles. China has also recently provided the Pakistani Navy with state-of-the-art frigates that could help fulfil Pakistan’s military ambitions.

Ever since the federal government of Pakistan confirmed the participation of Chinese fighter jets in the Pakistan Day parade, there has been a debate in the regional and international media as to which of the Rafale and J-10 fighter jets are better. Is. The Pakistan Air Force has been planning to replace its Mirage fleets since the Musharraf era, some of which have been in use for more than 50 years.

According to defense experts, Pakistani military planners are keen on replacing Mirage aircraft with Chinese-made J-10 aircraft, which can operate effectively in enemy territory and achieve targets. They can also be part of a strategic force.

PAF wants to replace the Mirage aircraft with the J-10, the best alternative to the Mirage fleet. They are capable of carrying large quantities of weapons to take strategic nuclear weapons.

One expert said the JF-17 could not carry large quantities of weapons. However, one expert pointed out that the J-10 fighter jets could be communicatively connected with the JF-17 so that the two aircraft could be used together in harmony on the battlefield.

Officials say that in the past, the Pakistani government was in the final stages of talks with the Chinese government when the program to buy 150 J-10 fighter jets fell on deaf ears. “The reason is the financial and economic crisis these days,” he said.

“It’s better not to put all the eggs in the American basket.”

The J-10 is primarily a fighter jet used in attack operations. On February 23, 2003, the first J-10 aircraft was delivered to the 13th Test Regiment of the Chinese Air Force. The fighter jet was announced in December of that year: “operational.” Work on this aircraft continued for eighteen years.

The J-10C began combat service in April 2018. Initially, the aircraft was developed for the People’s Liberation Army and Air Force, but later the Chinese weapons industry began building it for export purposes.

In 2010, the Pakistan Air Force was involved in developing J-10 fighter jets, and its engineers were engaged in mapping and building it. “This fighter jet is not new to PAF, our pilots have been flying it, and it is no stranger to them,” said one expert.

The ambiguity and skepticism in government circles about the J-10 deal could result from an ongoing tussle over who announces the purchase first. Whatever the situation inside the chambers of power, one thing is certain: PAF and former officials consider the deal, if agreed upon, a welcome addition to the Pakistan Air Force’s fleet.

Former PAF senior pilot Qaisar Tufail said: “It’s a welcome addition though, you better not put all your eggs in the American basket.”