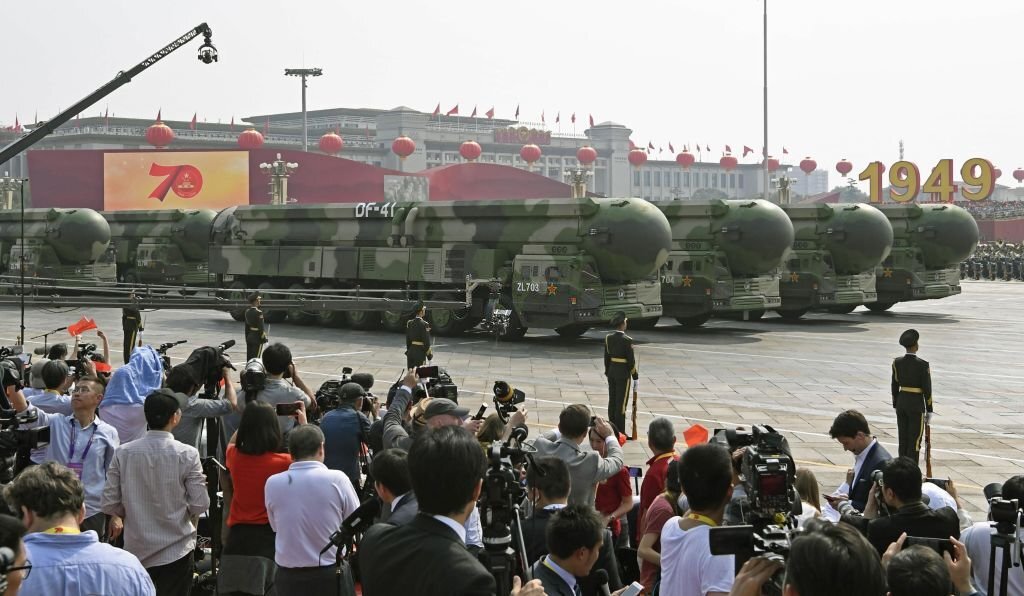 A Pentagon report has warned that China now has more than 400 nuclear bombs, having almost doubled its nuclear arsenal in just two years. While its military has deployed weapons in the region, particularly in Taiwan.

There has been an increase in “unsafe” and “unprofessional” military behaviour against the US and its allies.

China’s rapid nuclear expansion could enable Beijing to stockpile some 1,500 warheads by 2035. According to the Pentagon’s annual report to Congress, “China Military Power,” released Tuesday.

Compared to the U.S. nuclear stockpile, which has an estimated 3,800 bombs in an active state, China still lags far behind.

The People’s Liberation Army Rocket Force (PLARF) launched about 135 ballistic missiles for testing and training in 2021. “More than the rest of the world combined, excluding the deployment of ballistic missiles in conflict zones.”

It also continued the construction of three intercontinental ballistic missiles (ICBM) silo fields. These will house at least 300 new ICBM silos, according to the report.

The Pentagon report was based on information about China’s military capabilities that had been collected by December 2021. It also mentioned some key events in 2022, including Russia’s war in Ukraine and Nancy Pelosi’s visit to Taiwan.

Bradley Bowman, senior director of the Center for Military and Political Power at the Foundation for Defense of Democracies, said the “number and quality” of Chinese missiles are particularly worrisome.

“If one looks at the capacity and scope of China’s missile stockpile, it is staggering,” Bowman said.

He added that military modernization in China has been “deliberately and systematically outpaced by capabilities specifically designed to defeat the United States.”

China has also increased the number of “unsafe and unprofessional” clashes with the US military and its allies and partners in the region, including Australia.

“We have seen more violent and aggressive actions in the Indo-Pacific region. Some of which we would call dangerous,” the senior defence official said.

China said it had “tracked and removed” a US warship from waters near the Spratly Islands in South China Sea.

Beijing, despite other countries’ territorial claims, claims much of the resource-rich sea as its territory. And has built hundreds of hectares of artificial islands to bolster such claims.

The US Navy confirmed that the USS Chancellorsville guided-missile cruiser conducted a freedom of navigation operation ( FONOP ) near the Spratly Islands, but called China’s account of the mission “false.”

“The USS Chancellorsville conducted this operation in accordance with international law and then continued normal operations in that part of the sea where ‘high sea’ freedoms apply,” the US Navy said in a statement.

According to the Navy, the United States is defending every nation’s right to fly, sail and operate wherever international law allows, as the USS Chancellorsville did there.

“Whatever China says otherwise, we will not be deterred,” the Navy added. They termed China’s claims on the Spratly Islands as “excessive” and “illegal”.

The United States often conducts these operations in the South China Sea to challenge territorial claims by China and other countries.

An international court in The Hague has ruled that China has no historical claim to the South China Sea, but Beijing has ignored the ruling.

China has said it wants to have the ability to control Taiwan by force, if necessary, by 2027. And officials have seen “new high levels of intimidation and coercive activity” around the island.

A senior defence official told reporters at the Pentagon. “There is a new normal in terms of the level of military activity,” he said.

China made a number of missile launches and displays of military force around the Taiwan Strait during and shortly after Pelosi’s trip.

Which the speaker said was intended under a 1979 law to be in line with the democratic island. It was about standing up and keeping the US commitment to Taiwan.

Since then, China has scaled back aggressive actions around Taiwan but has not reduced its aggressive behaviour to the level it was before the visit.

According to the statement, Wei said, “Taiwan belongs to China. Taiwan and the solution to the Taiwan issue is China’s own matter, in which no foreign power has the right to interfere.”

China continues military cooperation with Russia. In 2021, large-scale joint exercises with the Russian military were held on Chinese soil for the first time. These exercises are known as Zapad/Interaction.

After Russia’s invasion of Ukraine in February, a senior defence official said Beijing had not provided direct military aid to Moscow. But had supported Russia by promoting Russian disinformation and propaganda.

China has the world’s largest navy in terms of number of ships, with about 340 ships and submarines.

According to the report, China’s military has 975,000 active-duty members. And Beijing’s aviation force is the largest in the region and third largest in the world, with more than 2,800 aircraft.

Cyber ​​espionage by China also remains a “modern, persistent threat,” according to the report.

General Mark Milley, chairman of the Joint Chiefs of Staff, said. “China is a country that has the potential to be a significant geopolitical challenge to the United States.”

Milli added that China wants to have the most advanced military in the world by 2049. And has achieved successes in cyber, space, land, sea and air. But he emphasized that the US military is ahead of the Chinese military.

“And as long as we are ‘number one,’ we will prevent the war that people are worried about. A great power war between China and the United States,” Milley said.