Russian Sarmat Missiles: How Dangerous Are They?1 min read 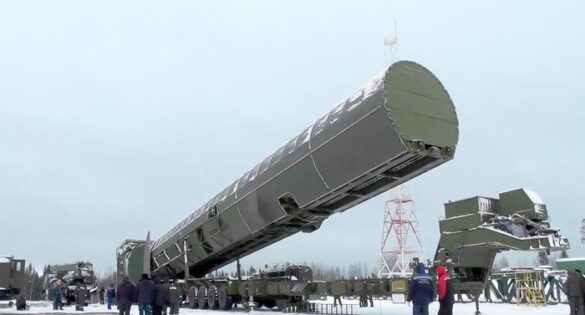 Russia has announced that it will install intercontinental ballistic missiles by the end of autumn. These advanced Russian Samrat missiles have nuclear capability and can hit targets in the United States.

Details about the Sarmat Ballistic Missile targets were provided by Dmitry Rogozin, head of the Russian space agency Roscosmos.

The initial test of these intercontinental ballistic missiles was carried out last Wednesday, April 20.

Prior to this test, a lack of funds and technical issues delayed the first test.

Western military analysts believe that more details about the missile are yet to come.

Many other military experts use a combination of super-heavy ballistic missiles for this missile.

The missile is named after the nomadic Sarmatian tribes. These tribes lived in the 6th-4th centuries BC on the territory of present-day Russia, Ukraine, and Kazakhstan.

This intercontinental ballistic missile can carry ten or more nuclear weapons at a time.

It can hit its target thousands of kilometers across Europe and the United States.

The Moscow government tested the missile during a military invasion of Ukraine and the ongoing war.

According to experts, tensions between the United States and its allies have risen sharply since 1962.

Dmitry Rogozin, head of Roscosmos, added that the missiles would replace the Voyevoda missiles already manufactured by the former Soviet Union.

Russia will install these Samrat Missiles will be near Krasnoyarsk in Siberia, some 3,000 kilometers east of Moscow. A military unit will also be deployed along with it.

Dmitry Rogozin also said that the installation of the Russian Samrat Missiles would provide security for our children and their offspring for the next 30 to 40 years.

On the other hand, the concern about the nuclear war in Europe is growing.

The concern stemmed from a military invasion of Ukraine by Russian President Vladimir Putin on February 24 this year.

Putin has also said that anyone trying to block Russia’s path would have to pay the price never seen before in history.

UN Secretary-General Antonio Guterres has said that the nuclear issue was a forgotten issue until yesterday. But that the Ukraine war has made that possibility even closer to reality.

Ukraine War: Estimates Of Financial Losses Of US$ 60 Billion So Far