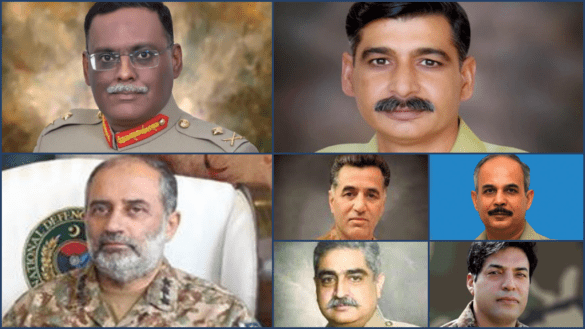 The Prime Minister of Pakistan will have to make some critical decisions in November 2022 and select Pakistan’s next Army Chief and Chairman Joint Chiefs of Staff Committee (CJCSC).

The next COAS and CJCSC will be chosen from the following senior generals of the Pak Army if the term of the current COAS General Bajwa is not extended.

Who is leading the race?

After the retirement of General Bajwa and General Nadeem Raza (CJCSC) in November 2022, Core Commander Rawalpindi Lt: General Sahir Shamshad Mirza will be the most Senior General.

He will be the front runner for both the important posts of COAS and CJCSC of the Pak Army.

After the current COAS and CJCSC, Lt: General Sahir Shamshad Mirza is the senior-most general in the Pak Army, and is currently serving as Core Commander Rawalpindi.

Before that, he was the Chief of General Staff at the General Headquarters of the Pak Army.

This division has now been shifted to Okara. He belongs to the Malhal Mughalan area of District Chakwal in Punjab.

Lt: General Azhar Abbas is currently serving as the Chief of General Staff at the General Headquarters of Pak Army.

Prior to his current posting, he commanded the Rawalpindi Core and was the DG Joint Staff Headquarter.

He was also the personal secretary of Ex-Army Chief General Raheel Sharif. He also served as Commanding Officer of the 12th Infantry Division at Murree.

Interestingly, the last five CJCSCs of the Pak Army have previously held the post of Chief of General Staff.

Lt: General Noman Mehmood Raja is the president of the National Defense University.

Before that, he was Core Commander Peshawar and Inspector General Communication & IT.

As Major General, he has also served in the Inter-Services Intelligence (ISI).

Besides that, he has also served as DG Analysis and general Officer Commanding Infantry Division at Miran Shah. Lt: General Raja belongs to the Atwal area of Rawalpindi.

In his career, the General has held the important posts of DG Inter-Services Intelligence and Adjutant General of Pak Army.

When he was Brigadier, he served with current COAS General Qamar Javed Bajwa as Chief Of Staff at Rawalpindi Core.

Before his current appointment, he served as Adjutant General of the Pak Army.

As Major General, he was GOC 10th Infantry Division Lahore and  Director-General Staff at COAS Secretariat.

He was also the Brigade Commander Waziristan and Kurram Agency.

According to traditions of the Pak Army, the outgoing Army Chief nominates and promotes the top candidates.

The Prime Minister then selects the next COAS and CJCSC from these promoted generals.

It is also important to note that the Major Generals whom the Army Chief is now promoting to the rank of Lieutenant General will join the race for the top post in November 2025.

But who will the Prime Minister choose? Will it be entirely at his discretion?

The most important question is whether the current Prime Minister will follow in the footsteps of former President Zardari and extend the tenure of the current Army Chief.

Or will he follow in the footsteps of former Prime Minister Nawaz Sharif and ignore the most senior officers.