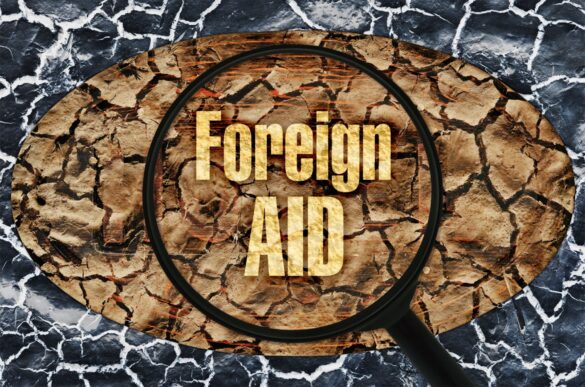 Foreign Aid is the transfer of money, goods, services, and technical advice from developed countries to underdeveloped or developing countries.

Foreign Aid is also one of the potent instruments of foreign policy. These Aids provide benefits to both developed and developing countries. The developed, i.e., the donor, receives some political and diplomatic objectives.

The process of Aid started after the Second World War. During the War, devastation occurred to the whole of Europe. So, in 1948 the US Secretary of State Marshall offered Aid to reconstruct European countries.

The main purpose of the USA’s Aid to European countries was to contain communism with the help of Europe. The United States made available about 3000 million dollars a year and 90% of this amount was in grants.

In 1956, to compete with the USA on equal terms, the former USSR also started the process of foreign Aid. In 1956 Mr. Khurosheve announced that the USSR would give Aid to non-socialist countries throughout the world.

The major recipients of USSR aid were India, Ethiopia, Afghanistan, and Egypt. Later on, France also entered the field, but France provided Aid only to its former colonies of Africa.

Due to the increasing influence of the USA, USSR, and France in International affairs, China has also entered the race and has extended Aid to Pakistan, Bangladesh, and other Third World Countries of Asia.

Foreign Aids are of two types, which are as under: –

The first type of foreign Aid is donations from rich countries to developing countries that are not returned. For example, US aid to European countries under the Marshall plan

Loans are also one of the important types of foreign Aid. Loans are returned, but they are of two types.

Soft loans are repaid in the form of local currency without interest.

Hard loans are returned, but together with interest in foreign currency.

OBJECTIVES OF THE DONOR OR DEVELOPED COUNTRIES

1. To Influence the Behavior of the Donee

Another objective of Foreign Aid for developed or donor countries is creating political stability in third world countries for personal benefits. US aid to South Asia and South Korea are examples of this kind.

Another objective of the donor is the seeking of recognition. For example, China extended all sorts of Aid to African and ASEAN countries for this purpose.

One of the most important objectives of the donor is to achieve political goals. During the Cold War, both the Superpowers, i.e. USA and USSR, used foreign Aid for this purpose. Similarly, America extended Aid to Pakistan during the Afghan War just for political goals.

To eliminate poverty from the developing countries is also one of the important objectives of donors. Sometimes Aid is extended on humanitarian grounds, e.g. UN aid to Bangladesh and Ethiopia. Similarly, China’s Aid to Pakistan can be cited in this category.

8. To Curb The Power of Other

Sometimes Aid is extended to developing countries purely on humanitarian grounds to eliminate poverty and other related problems.

Foreign Aid is also used for the promotion of the alliance system. After the Second World War, both the Super Powers, i.e. the USA and USSR, extended Aid to Third World countries to promote alliances. USA provided Aid to the members of SEATO and CENTO while USSR to WARSAW.

Another objective of the donor is to establish and develop trade relations with donee to create a market for the products and goods of the donor because donee possesses huge economic markets.

OBJECTIVES OF THE DONEE

Developing countries seek Foreign Aid for a variety of purposes. Some of these objectives are as under:

Another objective of the donee regarding Foreign Aid is national security. National security is one of the foremost objectives of every state of the world. So some states request Aid to maintain national security and territorial integrity. In the early fifties, Pakistan felt threatened by Indian hostile policies; therefore, she requested military Aid from the west and joined SEATO and CENTO.

Most developing countries have asked for Foreign Aid to promote national welfare and elimination of poverty. So donee requests Foreign Aid to provide adequate infrastructures such as highways, electricity, transport, communication, and industries, to break the vicious circle of poverty.

4. To Increase the Credibility of Government

Some countries have asked for Foreign Aid to increase the credibility of the government at the national and international levels.

Another main objective of foreign Aid for the donee is to establish new ‘agriculture, mineral and industrial units to provide job opportunities to the people and reduce unemployment.

Some states receive Aid for symbolic projects. Such as Ultra Modern Airports and Nuclear Power Plants. For example, Pakistan received a huge amount of Aid from China for the construction of the Heavy Mechanical Complex and Gwadar Port.

Another objective of the donee is to provide basic facilities like education, electricity, transport, highways, communication, public health, clean drinking water, and roads.

Another objective of the donee is to achieve rapid development in every field of life such as technological, industrial, agricultural, economic, social and political. So all the above fields are demanding foreign Aid from the donor. Because without Foreign Aid, developing countries are not in such a position to provide sufficient amounts of money to these sectors.

The following factors are responsible for the failure of foreign Aid.

It is one of the important reasons for the failure of Foreign Aid. It means that Aid has not been equally distributed. For example, the United States made a grave error in equating Aid to developing countries with Aid to Western Europe

The most important reason for the failure of foreign Aid as advanced by developing countries is that the quantity of Aid has been insufficient. One of the main issues of the NIEO negotiations has been the demand of the developing countries to increase the flow of official development assistance.

3. To Dominate the Decision Making Process of Developing Countries

4. No Pay Back System

The problem: of debt servicing could be regarded as one of the main reasons for the failure of foreign Aid. There is no payback system to return the loan or Aid to the developed countries to maintain its circulation.

The most important reason for the failure of Foreign Aid is that developed countries grant aid facilities to the developing countries for specific political objectives. For example, during the Afghan War in 1979, the USA provided Aid to Pakistan to fulfill her political objectives, i.e. containment of the USSR.

Aid Has Not Been Provided For Socio-Economic Development

Foreign Aid has not served the purpose it had intended for economic development for the Third World Countries. The flow of finance and capital benefited those in charge of the government much more than the people. Most Third World Countries are incapable of utilizing the Aid to the proper projects. Besides bad planning, corruption, and mismanagement, a vast amount of Aid is wasted in bureaucratic red-tapism.

The former President of Colombia, Alfonso Lopez, observed, “We have concluded that foreign aid breeds an unhealthy economic dependency and delays measures that should be taken for development.”