23000 Russian Soldiers Have Been Killed In Ukraine: Zelensky2 min read 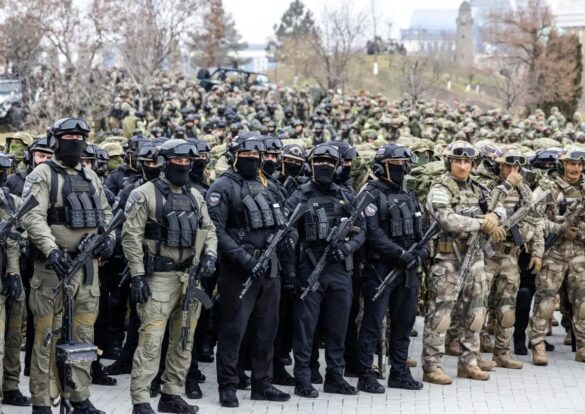 Ukrainian President Volodymyr Zelensky has said that 23000 Russian soldiers have been killed in Ukraine so far in the ongoing war.

Thousands of lives have been lost so far in the Ukraine war. Now Ukrainian President Zelensky claims that Russia intends to send more troops to Ukraine.

He claimed in a video statement that Russian forces had suffered casualties and the destruction of thousands of tanks and 25,000 other vehicles.

No verified number has been revealed about the deaths of Russian soldiers.

However, Russia claims that 1,000 Russian soldiers have been killed in the fighting since February 24.

Russian officials also claim that more than 23,000 Ukrainian fighters were killed during the same period.

Ukrainian President Volodymyr Zelensky added in his video address that Moscow was trying to send more troops to Ukraine to invade the eastern part of the country.

“Russia has sent more troops to the Kharkiv region in an attempt to increase pressure on Donbas,” he said.

“Every Russian soldier can still save his life,” he told the Russian military. It’s better to live in Russia than to die on our soil. “

Zelensky said Ukraine is continuing talks to strengthen sanctions against Russia. He said a decision on sanctions on oil imports from Russia was expected “in the near future”.

The Longer The War, The Greater The Difficulties

Ukraine’s war has had a severe impact. According to the United Nations, if the situation continues for the next 12 months, 90% of the country’s population will fall into poverty.

The war could push the Ukrainian economy back two decades. The war is currently being fought on a large scale in the eastern regions of Luhansk and Donetsk by Russia and Ukraine.

These areas are collectively known as the Donbas Region. Pro-Russian separatists largely control the area.

There is a possibility that Russia, after failing in its broader war plan, is now concentrating its power on the southern and eastern parts of Ukraine.

Ukrainian authorities are trying to evacuate more civilians from the besieged city of Mariupol by Russian forces.

The military administration in the Donetsk region says the first phase is planned to evacuate about 500 people.

Earlier, dozens of people were evacuated from a steel complex in the Ukrainian port city of Azovostal.

The steel plant has been under siege by Russian forces since the Russian invasion of Ukraine on February 24.

According to the United Nations, about 100 people have been evacuated from the steel plant. While the Moscow government puts the number at 80.

Since the beginning of the Russian aggression on Ukraine, thousands of civilians have been killed and millions displaced.

Pakistan’s Government Plans To Invite PayPal To Pakistan Next Week