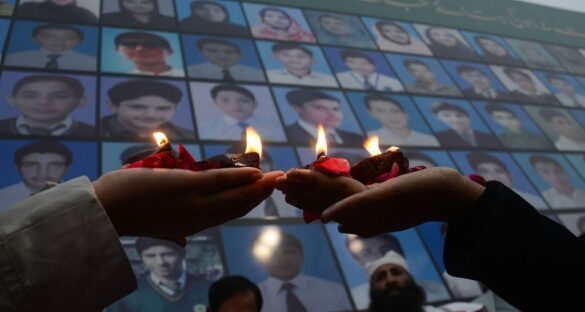 Even after eight years of this worst incident of terrorism in the history of Pakistan, the increase in terrorist activities in KP has once again worried people.

In Pakistan since the early seventies, December 16 is remembered as a dark day in the country’s history because the South Asian nation was divided into two on the same day in 1971.

Then exactly 43 years later, on the same day, i.e., December 16, 2014, an incident of terrorism took place, which shocked not only the Pakistani nation but the entire world.

Eight years ago today, around 150 innocent people, including 132 children, were killed in a terrorist attack at Army Public School Peshawar.

APS tragedy is considered to be the worst terrorist attack in Pakistan’s history so far. This was also due to the young age of the school children who were the attack targets.

This incident left the entire nation with a shock that is still fresh in their memories.

Where Do You Stand After Eight Years?

However, eight years after APS Tragedy, recently, a wave of concern has spread across the country due to attacks on government officials, especially the police, by the terrorist group Tehreek-e-Taliban Pakistan (TTP) in the province of Khyber Pakhtunkhwa.

The question is rising in many minds what has improved in the law-and-order situation after eight years?

Ajun Khan, president of Shuhada E APS Forum, an organization of parents and relatives of children killed in the APS tragedy, says that today after eight years, he sees only one change and that, according to him, is against terrorism. There is an awakening of public consciousness.

He said, “When our children were sacrificed, it made a difference. People don’t wait for government institutions and security agencies to stand against terrorists. They now come out on the streets against this monster.

You can see the recent examples of Malakand and Swat, where people have stood up under you against terrorists.”

Ajun Khan’s son Asfand Khan was a 10th-standard student at APS. He was among the 132 children shot by terrorists on December 16.

Ajun Khan said that his son Asfand was full of life. He said, “life did not give him respite, so he parted ways with me very early.

But when I see the grief of other children’s parents, I try to support them as much as possible. But everyone knows that our lives can never be the same.

He said he remembers his children not only on this one day of December but every day of the year. The wound of the untimely separation of children can never be healed.

Immediately after the attack on the Army Public School, the then-ruling party Muslim League (N) at the Center called a multi-party conference to reach a consensus on the future course of action against terrorism.

As a result of this discussion, a 20-point National Action Plan was drawn up.

It aimed to root out extremism and complemented the military operation launched a few months before the incident to target TTP strongholds in the northern areas.

Haq Nawaz Khan, a journalist based in Peshawar and associated with the American newspaper Washington Post, says that the increasing operations of the Taliban in the province have once again made the people here panic.

“After the APS tragedy, a National Action Plan (NAP) was made with the consensus of all political parties against terrorism. But unfortunately, it was not fully implemented.”

And today, the situation is before us. Those responsible for the attack on the army school are now emerging as a threat again.

This situation would not have been seen if they had been effectively eliminated.

Haq Nawaz Khan said, “Initially, some operations against terrorists were conducted under NAP based on intelligence. But the basic measures to break the back of terrorists were ignored.”

He said that amendments in the criminal laws were also recommended in the NEP to deal with terrorism cases. But there was no adequate legislation in this regard.

The state emphasized measures such as setting up military courts to punish terrorists and lifting the ban on the death penalty.

According to him, such measures may make a temporary difference, but terrorism cannot be dismissed.

Talking To The Taliban

Many circles have recently raised questions on the negotiations with the TTP by the Pakistani authorities.

In this regard, Pakistan is allegedly taking help from the Afghan Taliban. However, critics say that state talks with the TTP have never yielded a positive outcome and are still unlikely.

According to these analysts, the benefit of such negotiations in the past has only reached the TTP.

Dawn, an English daily in Pakistan, also wrote in its editorial today on December 16. That it is difficult to understand the state’s refusal to recognize the resurgence of militancy despite mass rallies against extremism in Swat and tribal districts.

The editorial has also raised the question of whether the country’s political leadership can be expected to show maturity and whether they can meet again to deal with terrorism.

The Battle For Influence In Africa, US Versus China And Russia