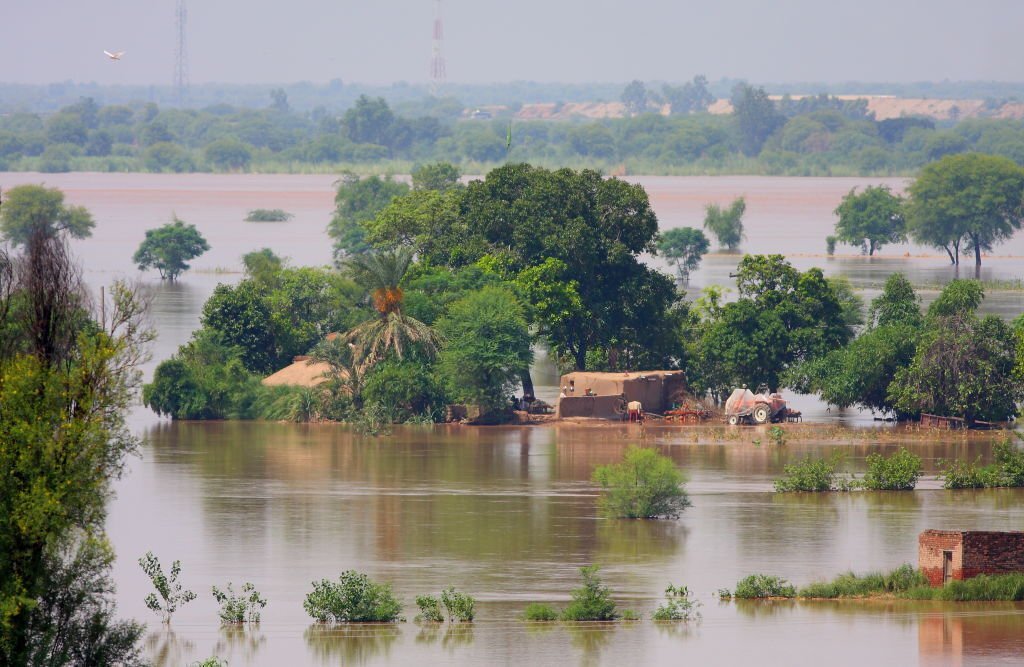 The Pakistani Prime Minister requested help, and the US President has also appealed for help for the affectees of floods in Pakistan.

The United Nations also reiterated its appeal for $39 million to help victims.

Due to the devastating floods in Pakistan, many people are also dying due to water-borne diseases, and Pakistan needs urgent help to deal with this situation.

Almost one-third of the country was submerged due to the flood.

We need food and medicine for the children.” On this occasion, the Pakistani Prime Minister met the US Secretary of State, Anthony Blinken.

He has also assured to help Pakistan in all possible ways in this challenging time.

The recent rains have inundated a large part of Pakistan, killing more than 1,500 people and affecting more than 30 million people so far.

Millions of people displaced by the floods are forced to live in the open under the sky. While the stagnant flood waters stretch for hundreds of kilometers.

This water may take two to six months to drain or dry up. In this difficult situation, diseases like cholera, diarrhea, skin allergies, malaria, dengue fever, and dysentery are also spreading, due to which the number of deaths has increased.

“We are deeply concerned about the genuine concerns of the wave of death and disease that has already reached its peak,” says UNICEF, the UN children’s agency.

Another disaster is looming.” The UN agency has renewed its appeal for US$39 million to help children most affected by the floods.

UNICEF said in a statement that only one-third of the funding it had previously appealed for has so far been met.

According to UNICEF, nearly 3.4 million children have been displaced, and floodwaters across Pakistan have killed more than 550 children.

“Without a significant increase in aid, we fear many more children will lose their lives,” UNICEF said.

US President’s Appeal For Floods In Pakistan

US President Joe Biden, while addressing the United Nations General Assembly, expressed concern over the flood situation in Pakistan and appealed for help.

He said, “Pakistan is still under water and needs help.” Regarding climate change, he said that at a time when Pakistan is submerged in water, on the other hand, the Horn of Africa is suffering from drought more than ever before.

“We don’t have much time left. We all know that we are already going through a climate crisis.

After this year, no one should have any doubts about it.

Health Problems Becoming A Crisis During Floods In Pakistan

UN Secretary General Antonio Guterres told world leaders that the climate crisis is the most pressing issue of our time.

Air and environmental initiatives are being shelved.” “We are facing climate catastrophe,” he said, recalling his recent visit to Pakistan.

After the floods, water-borne diseases are spreading rapidly in Pakistan. But doctors do not have the medicine to treat the displaced people living in crowded relief camps.

Although the flood water has receded now, the health conditions in various parts of Pakistan after the flood are unsatisfactory. Dangerous germs can quickly spread in standing flood water.

In the remote areas of ​​Pakistan, there is a severe shortage of medicines and clean water.

The summer in Pakistan is not yet over, and the heat is intense. Children are suffering from severe skin diseases. The current temperature in many areas is 30 to 40 degrees Celsius with 60% humidity.

Flood Ravages, People In A State Of Insecurity

Most of the Swat district consists of river valleys surrounded by mountains. This beautiful northern region of Pakistan is one of the most affected areas due to severe floods this year.

The floods have destroyed infrastructure and residential areas in the area. Local authorities have set up tents for the homeless at a school on an emergency basis.

Due to the non-availability of clean water in these relief camps, many stomach diseases like cholera and dysentery are also spreading among the displaced people.

People in these camps are using stagnant flood water for drinking and other needs, due to which various diseases are spreading.

Several cases of mosquito-borne dengue fever have also been reported in the area.

There is a dire need for mosquito nets and medicines to prevent mosquito bites in this area.

Women are also unable to maintain hygiene rules related to menstruation because the items used during menstruation are not available in the camp.

“There have been eight cases of infection among women in just one day. And they are due to repeated use of the same piece of cloth during certain days of the month,” an aid worker said.

These women do not even have access to pain relievers.

Aid organizations say more drugs are urgently needed to prevent the spread of water-borne diseases after the floods.

Currently, pharmacies do not have painkillers, antibiotics, or medicines to deal with urinary and gynecological problems, diabetes, and eye infections.

Many people in Swat contact their relatives in other parts of Pakistan to get insulin and other medicines.

World Health Organization (WHO) team visited a local hospital and promised to supply essential medicines and other supplies.

Pharmaceutical companies, however, blame the government for the drug shortage. According to them, rising prices have increased the cost of production, due to which they suspended manufacturing.

The Chairman of the Pakistan Pharmaceutical Manufacturers Association said, “How can we continue manufacturing a finished product when our companies’ costs are higher than the fixed price?” It’s a simple business principle.”