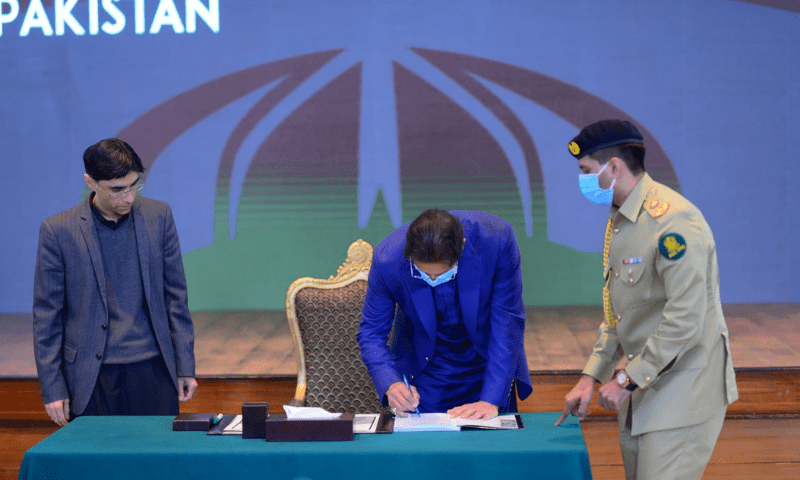 Mr. Moeed claimed it to be the first-ever document of its nature that consumed 7-8 years to compile. The document is thematically organized into eight sections, excluding two messages, acknowledgments, and executive summary.

Message by the Prime Minister recognizes that the “security of Pakistan rests in the security of its citizens.” The “citizen-centric approach” of the policy is based on the philosophy of “national cohesion and the prosperity of people.”

The PM’s message links the comprehensive national strategy with the vision for Pakistan’s foreign policy to garner “domestic stability and regional peace based on mutual co-existence, regional connectivity, and shared prosperity.”

The NSA message envisions national security as “broad, proactive and resolute” to secure “most vulnerable citizens.” His message supplements geo-strategy with the vision of geo-economics realized in the NSP document.

It justifies the need for the issued policy by claiming that Pakistan never had it throughout its existence. It claims that the document combines traditional and non-traditional security into one for the first time.

The section also outlines the ‘exhaustive’ process by enumerating 120 experts and 500 specialists and students who were consulted for the formulation of the policy. The policy review mechanism tells that NSD shall be the responsible body to make yearly updates to the document with the consultation of the office of NSA.

Lays down the National Security Framework (NSF). The national security vision tallies Pakistan as an Islamic State “with universal justice, equality, and tolerance principles.” The section conceptualizes security as “comprehensive national security” by recognizing, “interconnectedness of traditional and non-traditional elements of national security.” It also outlines the steps to be taken to safeguard national sovereignty.

Details national cohesion and its opportunities and challenges. The concept of national cohesion envisions Pakistan as “an Islamic Republic based on the principles of equality and justice, empowered by the diversity of culture, ensuring fundamental rights and social justice without discrimination, and delivering on its social contract with its people through good governance to strengthen national esteem and cohesion.” Identity and Culture, Socio-Economic Inequalities and Governance, and Institutional Capacity are listed as challenges and opportunities to be duly addressed through certain policy guidelines. The guidelines include; Preserving Identity, Ensuring Unity and Stability, and Making Public Service Responsive.

Titles, Foreign Policy in a Changing World. Its identification of challenges and opportunities are; Global Realignments, Foreign Policy in an Evolving World Order, and Projecting Pakistan’s Positive Reality. The section outlines external context to include; Jammu & Kashmir, The Neighborhood (Afghanistan, China, India, and Iran), Rest of the World (the Middle East and West Asia, United States, UK and Europe, Central Asia and Russia, and Other Important Regions) and Multilateral Cooperation (UNO, Other Multinational Forums, Championing Global Causes). Foreign Policy and the Conduct of Diplomacy are pointed as policy guidelines to access things.

The NSP document needs to be analyzed properly to understand the worth of the claims of the government. NSA takes credit for the policy by regarding it in the first document. The document is important because it is a path determiner for nuclear-armed Pakistan for the next four years. Of course, it is welcome that Pakistan has finally realized that it should have a good security policy to the cognizance of the public; but a wrong approach can push things towards worse.

#1- Recognizing Problems with No Clear Solution:

The vision of the document clearly states the problems faced by citizens. It tacitly recognizes that the common man is the actual element of nationhood, who remained ignored while designing state security priorities. The vision seems cognizant of the importance of “justice, equality, and tolerance… neighborhood based on mutual co-existence, regional connectivity, and shared prosperity.” It calls for unity in diversity to realize the “Islamic welfare state,” but the suggested anti-dots are either faulty or non-pragmatic.

The whole-of-Government approach assumes that citizens suffer primarily because of the lack of coordination amongst various institutions and departments. Coordination, of course, is important to increase efficiency, but it can’t happen if certain institutions are powerful enough to allow others to groom others at the cost of curtailing its dominance and incentives. The document ignores the fact in total. The policy also intends InclusivityInclusivity by combining all elements of national power, including government institutions and departments, private enterprises, and civil society”, but it doesn’t specify the workable procedure. Such an arrangement needs a lot of changes in the prevailing system on one side while empowering the society of the other side.

While the current political and official culture is a total discouragement to such empowerment, likewise, Self-confidence and Resolve deems healthy state-citizen relationships to cope with all internal and external challenges. But it does not mention the alienated feelings amongst various communities and sub-nationalities. The remaining four approaches, i.e., Introspection and Pragmatism, Proactiveness, Prioritization, and Consistency, are talked about in the language of motivation rather than concrete terms, meant for a state- Pakistan.

Orthodox approaches are suggested to develop national cohesion in Pakistan. Identity is described in confusing terms as it has been through Pakistan’s history. Islamic character, cultural diversity, and social contract are re-described as the sources of identity. It absolutely overlooks its disputant aspect and reality. The document should have accessed identity according to the theme of the vision of the document of economic and human security.

Likewise, the mention of Ensuring Unity and Stability is loosely defined and ill-described. It talks of “a strong Federation through democratic strengthening, political stability, consistent policies, and consensus on issues of national importance.” A stable federation is promoted through communal and provincial understandings. Pakistan isn’t a communal democracy; therefore, the existing model of democratic practices can’t be a solution to federal issues.

The document considers the economy an integral part of the envisioned national security. It talks of economic inequalities, growth and development problems, trade, investment, fiscal and energy crises. The policy tallies education, technology, investment, and the global human resource of its nation as a prerequisite to the economic future.

The promised solutions to the economic crisis seem over-ambitious and somehow non-pragmatic while keeping the prominence of traditional security in mind. For example, Pakistan selectively opted regional connectivity for reasons of affixing it with political issues in the region.

The policy “ensures Pakistan’s defense and territorial integrity in all their manifestations.” The part of the document is the reiteration to safeguard Pakistan’s borders and territory at any cost. In return, the cost has obliterated the human and economic security of Pakistan. It counts maritime security, strategic stability, space security, information, cyber security threats, and hybrid security as challenging threats to Pakistan. In the next section, the traditional security threats are accompanied by internal threats with more confusion.

Internal issues are displayed in a way as they are non-traditional threats. They are non-traditional issues for most of the countries, but in Pakistan, its intensity has reached the level of existential threat to Pakistan and society. Terrorism has caused more casualties in Pakistan than all traditional wars fought by Pakistan combined. Likewise, violent sub-nationalism is not mere violence in Pakistan to be resolved through simple measures but needs an overall political solution. The document inappropriately suggests writ of the state and the rule of law as the remedies for the issues.

The section of the document repeats the foreign policy stances. Similar language is found with regard to Kashmir, India, Afghanistan, the US, China, different regions and organizations. It has suggested no basic reform in the traditional approaches of Pakistan’s foreign policy to reconcile with the vision of comprehensive national security.

The section has pointed out only three aspects of human security in Pakistan, i.e., population/migration, health security, and climate/water stress. Of course, these are important, but other important issues are not referred to at all, e.g., personal security, community security, and political security.

Moving towards comprehensive security is a fascinating idea that needs to be actualized. Bringing the idea into practice would need a proper structure of institutions, offices, laws, and norms. The existing structure is outdated to adapt to the demands of the non-traditional security program. More open, free-handed, and loosely controlled institutions are needed to be encouraged with a guarantee of freedom and protection. Research, awareness, advocacy, and entrepreneurship can help Pakistan to realize the dream.

The NSD is primarily meant for traditional security. The division is small, inefficient, and ill-equipped to work on the NSP and its promotion and protection. Keeping in view the huge task, the NSD should be a large body with different specialized chambers composed of experts from different fields of comprehensive security.

Indeed NSP is a good intention of the government to go along with the trends and demands of the situations and times. It is the first-ever document of the government to deal with comprehensive national security. In many ways, the document seems to replicate the ideas generally discussed by intellectuals and civil society in Pakistan. It should have been a government policy document in an absolute sense. Only good intentions can’t correct the wrongs. It needs pragmatic steps to realize the dream into reality. Otherwise, it would become a day-dreaming to precipitate the issues further.

Dr. Khurshid is a professor at the Department of International Relations, University of Peshawar. He can be reached at [email protected].