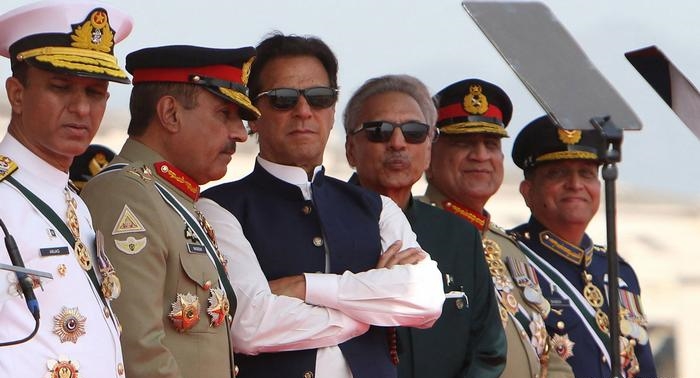 In the context of the current political crisis in Pakistan, a key question is what can happen in the country in the coming days and weeks? The answer is anything from political continuity to possible military intervention in the country.

The political turmoil in Pakistan for the past several weeks has intensified.

On Sunday, April 3, it took the form of a formal crisis when the opposition’s no-confidence motion against Prime Minister Imran Khan was put to the vote.

In the ongoing parliamentary session, the Deputy Speaker rejected the resolution as a result of an external conspiracy and adjourned the National Assembly session.

Prime Minister Imran Khan then addressed the nation and announced that he had requested President Arif Ali to dissolve parliament.

Within hours, the president dissolved parliament, and the opposition announced its intention to approach the Supreme Court.

However, before that, the Pakistani Supreme Court took suo motu notice of the affair. The matter is still pending in a five-member bench of the Supreme Court headed by the country’s Chief Justice.

The question is what kind of legal and political situation is likely to arise in Pakistan now.

Q.No 1 What If The Supreme Court Ruled Against Imran Khan’s Actions?

A subsequent court ruling against blocking a no-confidence motion against Prime Minister Imran Khan could result in the annulment of all following measures, including the dismissal of the parliament and a new one within 90 days. This includes the decision to hold general elections.

In that case, the lower house would be restored, and a no-confidence motion against Prime Minister Imran Khan would be voted on.

If the no-confidence motion against Imran Khan succeeds, the opposition will have to nominate a new prime minister, who will remain in power until August next year.

Q.No 2 What If The Judiciary Gives Endorsement To The Actions Of Imran Khan?

If Pakistan’s Supreme Court upholds Prime Minister Imran Khan’s actions, then new general elections must be held in Pakistan within 90 days. This will go politically in Imran Khan’s favor, and he will be able to use the public sympathies to his advantage.

Q.No 3 What If The Court Says Imran Khan’s Actions Are Illegal, But Elections Should Be Held?

Pakistan’s Supreme Court may rule that Prime Minister Imran Khan’s actions were illegal, but since the process of holding new general elections has begun with the parliament’s dissolution, early general elections should be held in the country.

In that case, legal action could be taken against Imran Khan and his close political associates.

Q.No 4 What If The Supreme Court Does Not Intervene?

In Pakistan, the issue of whether the Supreme Court can interfere in parliamentary proceedings is also hotly debated in the national media.

A clause in the Pakistani constitution states that a court cannot interfere in parliamentary proceedings.

But in the past, the country’s judiciary has interpreted the same clause differently.

Suppose the Supreme Court decides to distance itself from this whole parliamentary issue. In that case, it will mean that Prime Minister Imran Khan’s actions were justified, and even then, new national elections must be held in the country within 90 days.

Q.No 5 What If The Court Proceedings Continue Unabated?

If the hearing in the Pakistani Supreme Court continues unabated and no decision can be reached soon, this development could affect the country’s policies due to a power vacuum, such as financial negotiations with the IMF. Etc.

With the dissolution of the parliament in Pakistan, the cabinet has also been dissolved. At present, there is no government in the country, but Imran Khan will continue to perform his duties till the appointment of an interim prime minister.

Q.No 6 What Are The Chances Of Interference Of Military?

To date, in the history of Pakistan, the military has intervened in politics three times based on political and economic uncertainty. This was done in 1958, 1977, and 1999.

The Pakistani army has been a major player in the country’s politics for decades, as it has ruled the South Asian country for 33 of the 75 years of its independent state history.

Q.No 7 Is This Political Crisis A Threat To Democracy?

Experts say the rejection of the no-confidence motion filed by the opposition in Pakistan could profoundly affect Pakistan’s democracy.

The dissolution of the National Assembly in Pakistan, the rejection of the no-confidence motion, and the call for new elections have raised further questions regarding the constitution of Pakistan.

At present, all eyes are on the Supreme Court and how it will interpret the constitution on this whole issue.

Q.No 8 What Is Its Impact On Democracy?

Michael Kogelman, a South Asian affairs expert at the Woodrow Wilson Center in Washington, D.C., says recent events are tantamount to a Pakistani leader bypassing the democratic process. ” Declared an external conspiracy, for which there is no proper evidence.”

Experts also say that the Speaker and Deputy Speaker of the National Assembly are constitutionally obliged not to take sides.

Legal expert Osama Malik says, “There is no precedent for such an attack on democracy by an elected government. If the Deputy Speaker’s move is legalized, every incoming government will reject the no-confidence motion, calling it an imaginary conspiracy. “

Madiha Afzal, an expert on Pakistan and Afghanistan at the Brookings Institution, says the government has “turned a political crisis into a constitutional crisis through an unconstitutional measure.” It is a great blow to democracy. “

Q.No 9 Will The Army Intervene?

So far, Pakistan’s military has taken a neutral stance on the issue, but the political crisis could threaten the country’s security. It is unclear how long Army Chief General Qamar Bajwa will remain silent.

Moving away from Imran Khan’s position regarding the United States, he has clarified his position. Speaking at the International Security Dialogue in Islamabad, General Bajwa criticized the Russian invasion of Ukraine, calling it a great tragedy.

He also expressed his desire to maintain good relations with Washington and said that China and the United States are very important countries for Pakistan.

According to Kogelman, “the military has made it clear that she was not involved in Imran Khan’s decision.

We also know that there was tension between the Army Chief and the Prime Minister. This shows that if the court challenges Khan’s move, the army will not try to help Khan.

Kogelman added that “Khan will not be able to expect any help from the army in the possible early elections.”

Although Imran Khan’s anti-American stance has boosted his popularity, analysts say it is not easy for Khan to win the next election. Madiha Afzal says, “It is not clear that Khan’s party can win enough seats in the next elections, especially without the support of the army.”

Analyst Kogelman believes Khan has reactivated his base recently, but he will “face challenges in constituencies due to his poor performance in trying to reduce the economic crisis.”

Legal experts acknowledge that populist slogans, such as anti-US rhetoric, are famous in Pakistani politics. However, Khan has been criticized by opposition parties, especially in the country’s most populous province of Punjab, by former Prime Minister Nawaz Sharif’s Muslim League. There will be a tough challenge.

Imran Khan’s supporters are hopeful. They are confident that their leaders will survive the current constitutional crisis and be able to secure a majority in the next parliament.

The United States, Britain, And Australia Have Agreed To Jointly Develop Hypersonic Weapons.