All Documents Related To Nuclear Activities Handed Over To The United Nations: Iran3 min read 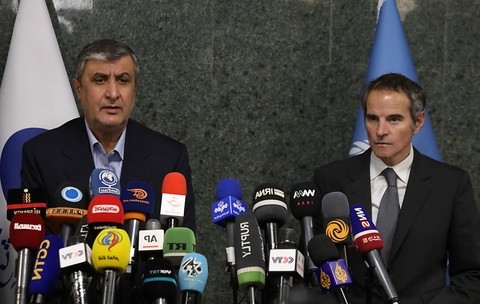 Tehran says all documents requested by the UN on its nuclear program have been provided.

Iran’s head of nuclear affairs, Mohammad Islami, said that his country had handed over documents related to its nuclear program to the International Atomic Energy Agency (IAEA), the UN nuclear watchdog.

He also demanded that the investigation into uranium from three undisclosed locations be stopped.

The International Atomic Energy Agency (IAEA) has agreed with Iran on a three-month plan to ignore the unresolved issue of uranium particles at three old yet undeclared nuclear sites and try to move forward.

Negotiations are underway to restore the 2015 Iran nuclear deal, and if it progresses, it could be restored soon.

Under former President Donald Trump, the United States unilaterally pulled out of the deal in 2018 and reimposed tough sanctions on Iran.

What Did Tehran’s Nuclear Authority Say?

“We handed over the documents to the agency on March 20,” Mohammad Islami told a news conference on television.

“They are currently reviewing the documents and are likely to visit Iran for further talks, after which the IAEA will present its findings.”

Islami said he expects IAEA inspectors to visit Iran by the end of June to “review its responses” and complete its final report on the subject.

He also criticized his rival Israel during a news conference, accusing it of “sowing seeds of suspicion” about the aims of its country’s nuclear program.

What Did The Agency Say?

The UN watchdog has long said that Iran has so far provided unsatisfactory answers to its questions.

However, the agency announced a new round of talks in early March.

Washington and Iran have been in talks in Vienna for nearly 11 months to restore the nuclear deal, but the talks are currently stalled.

US intelligence agencies, Western nations, and the IAEA say Iran maintained an active nuclear weapons program until 2003, but Iran vehemently denies this.

Blame Game Between Iran And The US For Halting Nuclear Talks

Meanwhile, Iran and the United States have accused each other of stalling the UN Security Council talks.

On Monday, Iranian Foreign Minister Hossein Amir-Abdollahian called ” US extravagance ” the reason for the ” pause in the nuclear talks. “

Mr. Amir Abdullahian said it was possible to reach an agreement.

Mr. Khatibzadeh said the Washington administration had not yet made a political decision on the remaining issues in the Vienna talks. ”

Mr. Khatibzadeh also stressed that Iran does not cross its red lines and does not back down from its demands.

“Everyone who has been in the negotiations knows exactly which side has made constructive proposals and which side has made demands that have nothing to do with BRICS and that we have reached the status quo,” Mr. Price told a State Department news conference.

Mr. Price also stressed that there is still time to resolve disputes.

According to him, the ball is in Iran’s court, and the final decision is with the Iranian government.

Mr. Price warned that as Iran’s nuclear program continues to evolve, the country’s runaway time may reach a point where the revival of the IAEA will no longer be worthwhile for the United States.

In recent weeks, the continuing controversy over issues such as removing the Revolutionary Guards from the US list of terrorist organizations, which has met with strong opposition from Democrats and Republicans in Congress and the White House’s regional allies, has hampered agreement on resumption talks.

At the same time, it is reported that the United States has informed Iran that if it wants to remove the IRGC from the terrorist list, it must abandon any retaliatory operation in connection with the assassination of Qassem Soleimani.

The tone of US and Western officials has also become more pessimistic in recent weeks about the possible success of the talks.

Enrique Mora, the EU’s chief negotiator, traveled to Washington after visiting Tehran to discuss the stalemate in the Vienna talks with US officials.

The Vienna talks began last April intending to pave the way for the revival of the UN Security Council and the return of Iran and the United States to fulfill their obligations between Iran and the P5 + 1.

The United States is indirectly involved in these negotiations.

The United States, Britain, And Australia Have Agreed To Jointly Develop Hypersonic Weapons.